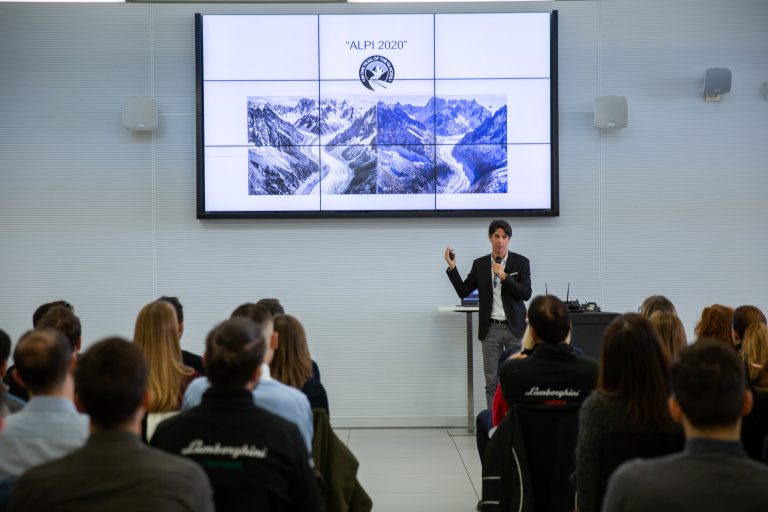 24 hours of presentations and conferences on climate change around the world. This was the 24 Hours of Reality: Truth in Action, which started yesterday, November 20 and is still going on as we write. A kind of global conversation at municipalities, schools, workplaces, about the climate crisis and how to solve it all together by implementing the actions that can make a difference every day.

Numerous and important the entities that participated, and the project “on the trail of the glaciers” could not but be among the protagonists. Fabiano Ventura, together with Paola Fiore, National Coordinator for Italy of Al Gore’s The Climate Reality Project, took part in the exchange and training that Lamborghini offered its employees.

Fabiano Ventura spoke about his photographic-scientific project and explained how the strong power of communication of images and photographic comparisons, combined with the results of scientific research, can contribute to raise greater awareness about the impact of human activities on climate and the need to protect natural resources for future generations.

Paola Fiore spoke about the topic of the climate crisis and the origin of global warming, closely linked to human activities and increasing emissions of greenhouse gases into the atmosphere, due to the use of fossil fuels such as coal, oil and natural gas. The main impacts of the increasingly intense and frequent environmental and climate disasters and the consequences on human health, in particular, that of children and the weaker population, of animal and plant species, were analysed, in addition to the analysis of the risks to businesses and industrial activities.

As was shown, also according to the latest scientific data about climate, it is still possible to fight climate change, decarbonizing our economic and productive system by 2050, moving to a 100% use of renewable sources, primarily solar and wind.

Automobili Lamborghini was invited to participate in the 38th Training of The Climate Reality Leadership Corps held in 2018 in Berlin, as it is considered as a company that distinguished itself in the field of Environment and Sustainability.