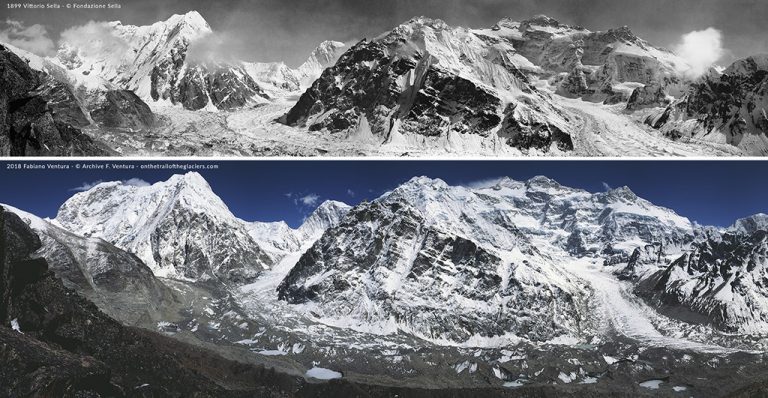 The last issue of the prestigious scientific magazine Nimbus, directed by Luca Mercalli, dedicates the cover and 18 pages inside to the scientific results of the expedition “On the Trail of the Glaciers” – Himalayas 2018”, illustrated with photographic comparisons made by Fabiano Ventura during the expedition and signed by a group of researchers of the Italian Glaciological Committee, the State University of Milan and Roma Tre University. They are all members of the scientific team of the project On the Trail of Glaciers.

The article aims at contributing to the knowledge of the current state and evolution in the last 100 years of the glacial areas of the central Himalayas in Nepal (Kangchenjunga area) and of the Everest and Cho Oyu area, in China, by presenting data and analysis collected during the expedition to the Himalayas in the framework of the project On the Trails of the Glaciers held in the summer of 2018.

In general, what is pointed out by the photographic comparisons and the processing of data taken from satellite and terrain images is an indisputable regression phase of the glaciers in the areas under consideration. The comparison between the historical images of the first decades of the 20th century (and also the historical cartography) with the current ones shows not just retreats of the fronts, but above all reductions in thickness with far-reaching morphological transformations that have substantially modified the landscape of these Himalayan regions.

Some more striking data show that from 1990 to 2017 3.4% of the surface area was lost of the Kangchenjunga glacier, 3.5% of Rongbuk (Everest) and 3.9% of Gyabrag (Cho Oyu). Indeed, many other interesting data are analysed in the long and detailed article.