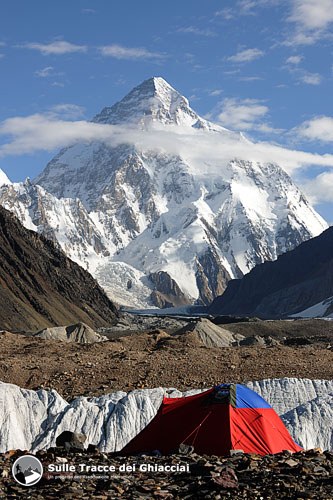 After a week of trekking over the endless moraines of the Baltoro glacier, we arrive at the magnificent amphitheater of Concordia at 4650 meters, one of the most spectacular locations of Karakorum, surrounded by some of the highest peaks on Earth, including the K2, the Broad Peak, Gasherbrum and the chain of the Masherbrums. Concordia, one of the largest glacier in the world, is formed by the confluence of the Baltoro and Godwin Austen glaciers, and by the numerous tributary glaciers that descend from the slopes of Broad Peak and Gasherbrum 4

Here, as the first Italian expeditions on 1909 and 1929, we set up our base camp and thank our 60 porters, who are now free to return to Askole. Immediately we begin the study and research of the historic photographic viewpoints, with the necessary inspections to determine the technical difficulties of the climb, and to mark the slender tracks that we’ll follow at night, during during the climbs to reach the peaks in time to take advantage of the better light conditions.

One thought on “Concordia”