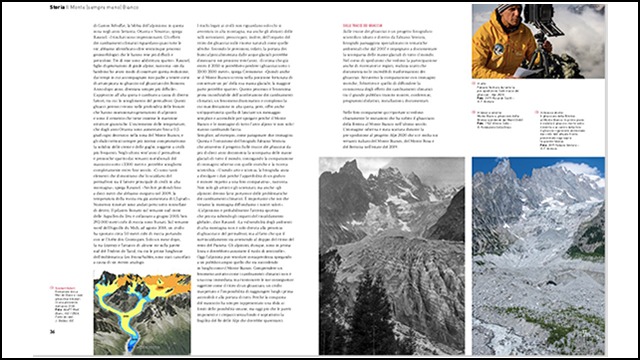 “Like canaries in coal mines used to warn miners of dangerous gas leaks, the destruction of these environments is a warning we cannot ignore.” The striking juxtaposition is reported in an article published by UP Climbing magazine, in which the phenomenon of climate change is recounted from a mountaineering point of view.

Ludovic Ravanel, a mountain guide from Chamonix and geomorphologist at the French National Centre for Scientific Research who also participates in the AdaPT Mont Blanc project for the development of the resilience of the territory, tells the story of the difficulties of mountaineering in the Mont Blanc area.

“To understand the relationship between global warming and mountaineering – says Ravanel in the article – we used as a reference point ‘The Mont Blanc massif, the 100 most beautiful climbs’ by Gaston Rébuffat, the bible of mountaineering in this area in the 1970s, 1980s and 1990s. The results are impressive. The effects of climate change affect almost all climbing routes; we have identified over twenty-five geomorphological processes that have made them more difficult and dangerous. Three of them have even disappeared”.

In the interesting article that goes into detail about the transformations that have occurred on the various slopes and on the most famous alpine routes of Mont Blanc, the fundamental contribution made by the project “On the trail of the glaciers” is highlighted. Through photographic comparisons, it testifies the effect of climate change and spreads a greater knowledge of the dramatic phenomenon that is radically transforming the mountains all over the world, starting from “our” Alps.