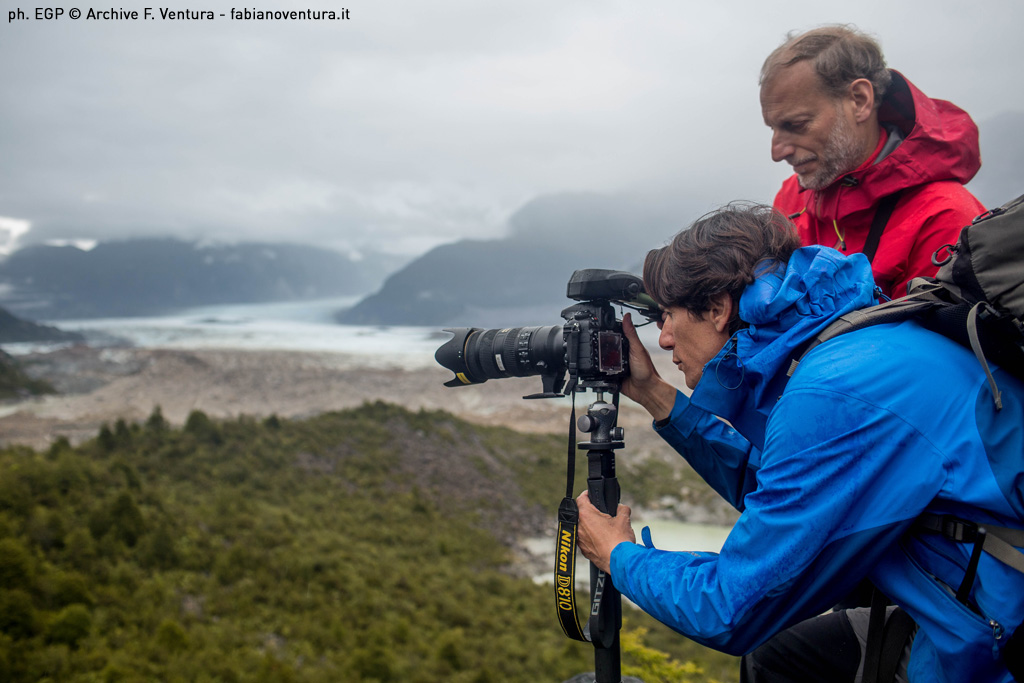 From the diary of the expedition: On 18 March, we start from El Calafate (Argentina) to join the team of engineers and geologists in Balmaceda in Chile and then continue the next day with the jeep to the place from which we will reach the glacier Exploradores to carry out the scientific monitoring activities.

The journey will be longer than 36 hours, first by bus then by car then by boat and back by car to then continue with the jeeps we will rent.

Arriving the following day to the village of Porto Rio Tranquillo, after covering about 200 km on the beautiful Carretera Austral, we immediately contacted the CONAF for the issue of scientific permits.

The activities are many, the glaciologists of the Department of Earth Sciences of the University of Milan want to determine the surface velocity and melting rates of the Exploradores glacier; while the photogrammetric and geomatic activity, which we have foreseen with the engineers of the Department of Civil, Building and Environmental Engineering of the University of Rome “La Sapienza”, will aim to create a 3D model of the glacier front through multiple georeferenced photographic transects and a post production with specific software.

After a little ‘bureaucracy for the finalization of the permit we leave for the first survey but as soon as we start working on the field we are immediately stopped by a local guide who asks us if we had permission. The guide, however, is very nice and comprehensive and lets us work despite not yet having the official permission.

At first glance the glacier is very extensive, its terminal moraines, from which I had foreseen the realization of most of the photographic transects are at times dangerous for their instability and large amount of vegetation. The third day we place the GPS station and perform the first tests that are complicated because of the signal is not always present.
Every evening, back home, we download the photos and we immediately do the first processing tests putting a strain on the Mac Book Pro.

The following days, strong of the first positive results, we begin to extend our range of action and we venture with the machete to the hand digging some real tunnels in the dense vegetation. Arrived at the base of the central glacier moraine, full of cuts and bruises because of the many falls, I decide to climb only up to half slope, even if very dangerous, due to possible falls of unstable rocks. The top of the moraine is invaded by very tall trees that could cover the GPS from satellites and compromise their accuracy.

After a week of fieldwork and infinite rendering Andrea and Martina finally show me a first draft of the 3D model. At first glance the quality in terms of resolution is not very high but the effect in seeing such a large glacial mass in digital and 3D versions is truly exciting. My first request from a photographer and disseminator is to be able to increase the resolution and the realisticity of the colors. Mattia and Martina immediately reassure me by confirming that once back in Italy you can render the textures more appropriately with the super computers of the university and map again all the polygons of the model with a very realistic effect.

My thought at that point immediately goes to the possibility of using this photo-realistic 3D model for a video installation thanks to which to show with interactive effects, the glacier moving to the students, thus being able to explain its complex dynamics and the importance of their monitoring for the study of climatic variations.

From a quantitative point of view, instead, the direct photogrammetric method, in which most of the images are georeferenced with GPS, is immediately effective both in terms of timing and logistic organization. The beauty of this new method, in fact, in addition to being very precise, is that it does not require the use of GPS points of reference on the glacier, thus also allowing monitoring on inaccessible glaciers.

During the last days of activity on the glacier, in addition to finishing some photographic transects, I dedicate myself to documenting the work of the glaciologists and I follow them to measure the ablatometrical poles positioned at the beginning of the expedition. These, in particular, serve to verify the superficial glacial ablation. Moreover, through a specific tool, we measured the glacier’s reflecting power according to the amount of surface debris that covers it.

For a few hours I follow the interesting work of Andrea Tamburini that with the laser scanner is also creating a 3D model of the glacier to be compared with previous models made in 2012 and that we will also compare with the one made by us with the photogrammetric method.

To end the expedition we gather all in the hotel El Puesto to check and compare the data taken in the field and define the lengthy processing work that will have to be carried out once back in Italy. The balance is more than positive, the weather, despite being in Patagonia, a region known for its instability, gave us wonderful days.

Now in returning to civilization we are missing only the stage in Buenos Aires and Santiago de Chile where I have scheduled two press conferences in collaboration with our sponsor Enel Green Power.

Below we publish the fifth video clip of the expedition and a gallery with some backstage photos:

On the Trail of the Glaciers Ande 2016 dispatch 04 from Fabiano Ventura on Vimeo.