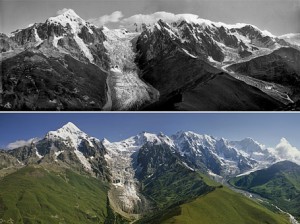 Started on July 28th, the photographic-scientific expedition “Caucasus 2011”, which interested the georgian side of the Caucasus range, was concluded on September, 1st.

Four main glaciers examined; twenty comparative’ photographs realized with the same perspective used to shoot images from the first pioneers more than 120 years ago; several ablations sticks positioned; two data logger installed; three helicopter explorations; two years of preliminary studies and of logistic organization; and more than one month of on field activity. All this filmed by a specialized TV crew for the production of a documentary, which will be soon distributed worldwide.

The expedition’s team, head and coordinated by Fabiano Ventura, traveled a mostly uncontaminated and unexplored region north-west of Georgia, characterized by the highest Caucasian peaks, between 3000 and 5000 meters. The main aim of the expedition was to re-shoot the historical pictures from the same point of view, to evaluate glaciers surface’ variations through geomorphological surveys, and to measure the melting speed of the glaciers thanks to the installation of ablation sticks – to correlate the thickness of the debris floating on the ice, its fusion rate and the albedo of the different surfaces.

On the field were, along with Fabiano Ventura, the glaciologists Prof. Kenneth Hewitt e Dr. Riccardo Scotti, and the TV crew composed by director Marco Preti and cameramen Luca Venchiarutti, aimed at realizing a documentary produced by SD Cinematografica, which will be soon broadcasted on the main national and international TV channels.

A few days from the end of the expedition, the first results of the work can be already highlighted, based on the photographic comparisons and on the scientific observations: the Caucasus’ glaciers display a huge regress of their terminus, and significant loss of thickness, such as the Chalaat glacier that lost 200 m of thickness and whose terminus regress more than 3 km.

To illustrate the activities carried out during this expedition, a press conference will be held on October, 2011, at the central National Institute of Geophysics and Vulcanology of Rome.