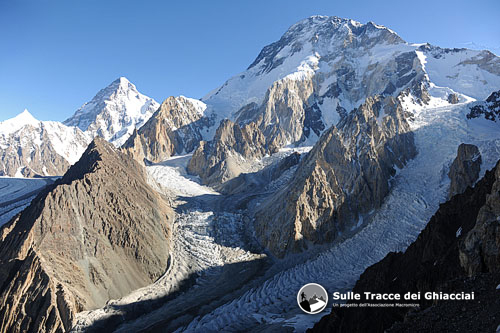 The Baltoro Glacier is one of the largest valley glaciers of the Earth and, being almost 60 km long, is rankings in fifth position in the world for lenght. The surface of this glacier is almost entirely covered with debris, thus it’s classified as a debris covered glacier. Where does all this debris originated?

The action of frost-thawing and gravity contribute to the degradation of the rocks, which are transported and incorporated by the glacier; the transport occurs during the entire journey of the glacier while the catch of debris inside the mass
occurs predominantly in near crevices and at the summit of the glacier (storage basin, or area where the snowfall has way to accumulate from year to year, giving rise to the ice) where new layers of glace-snow cover the older layers and the debris. Later, thanks to the action of gravity bond to the weight of the ice layers and to the slope of the relief, the ice will move downstream.

The area downstream of the line of equilibrium is defined pool of ablation, that is the area where the glacier looses its mass. From this point on, the glacier begins to deposit its debris in the form of moraines, still continuing with the process of ablation and moving downstream, the loss of mass will cause most of the debris incorporated previously come to the surface (think about the different layers of snow-ice that, overlapping in the area of accumulation, had incorporated the debris and are now removed by melting), covering almost the entire glacier, giving birth to a debris covered glacier.

3 thoughts on “From snow to Debris Covered Glaciers: the Baltoro glacier”