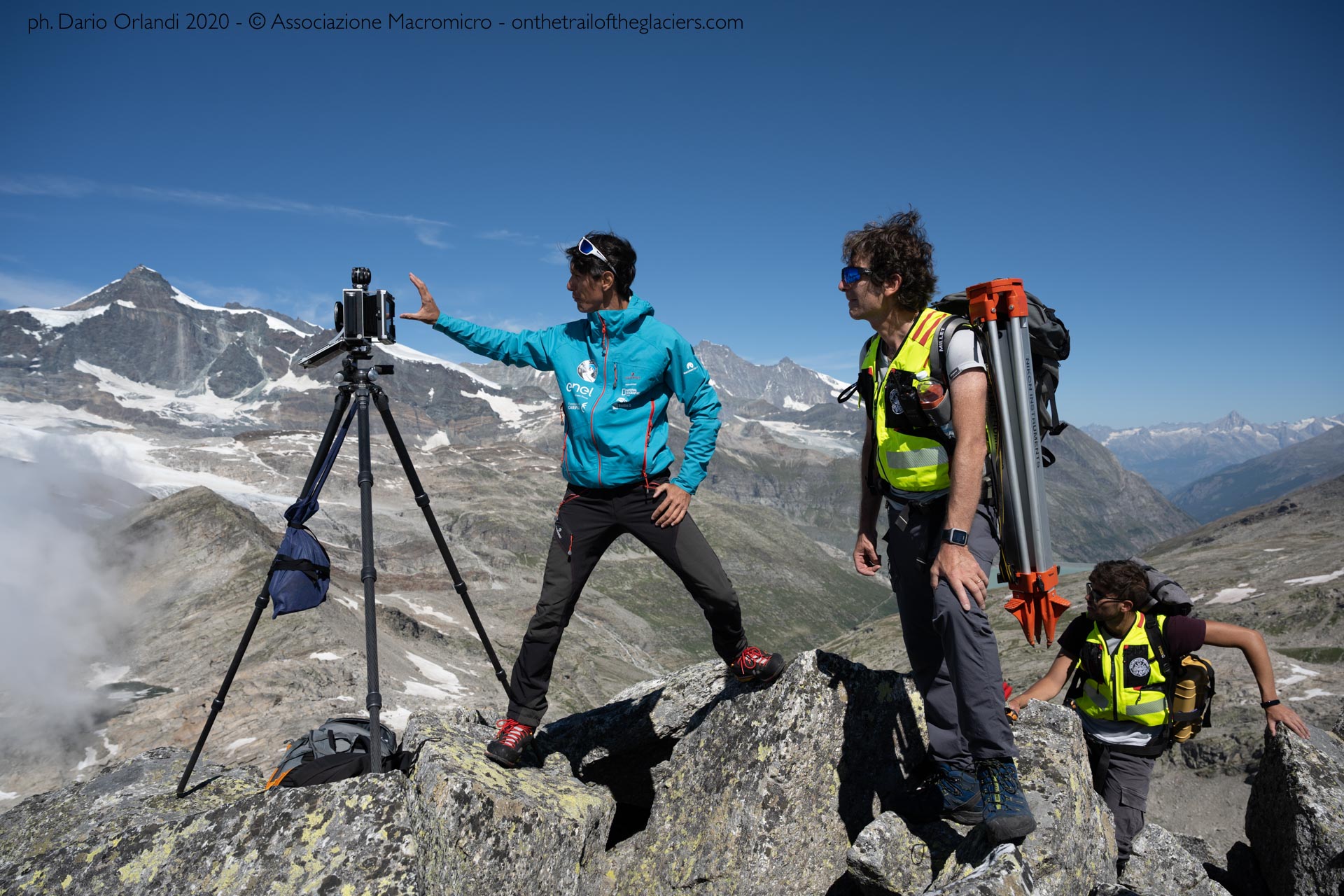 It is the first time I see the east face of Monte Rosa live, but I could not imagine it would be so impressive. I have seen and photographed many great mountains during my expeditions in the Himalayas and Karakorum, but now I understand why the east face of Monte Rosa is considered the “Himalayan wall” of the Alps. It is no coincidence, in fact, that Walter Bonatti and his companions came here to train before leaving for the K2 expedition in 1954.
From this great wall descend enormous flows of ice that flow into a single glacial tongue, the Belvedere, one of the most fascinating glaciers in the entire Alpine region.

The first planned ascent consists in reaching Passo Moro in search of the shooting points used by the great photographer Vittorio Sella for some of his famous shots of 1895. Personally, I have always been fascinated by the panoramic sequence taken by the photographer from Biella from the summit of the Joderhorn (3,034 metres), an elevation that can be reached from Passo Moro in about 40 minutes by an intuitive but not really easy route.

On the morning of August 8th, together with Riccardo, Marco, Dario and Federico, we take the first cable car to the summit possible, but when we reach the summit we start to see some mounds of humidity rising from the bottom of the valley, quickly covering large areas of the wall. So I decide to postpone the shots until next day and I call the Oberto-Maroli hut to reserve an overnight stay in order to be on the spot the next morning. In the meantime, Alberto Cina, Paolo Maschio and Marco Fronteddu – researchers at the DIATI of the Polytechnic of Turin – join us to precisely geo-reference the nodal point of my camera. This is needed in order to use the photographs I will take to develop a 3D model of the glacier and compare it with the model that will be created using Vittorio Sella’s historical photographs.

The day after, me and Dario wake up very early to be on top of the Joderhorn at the first light of dawn. After taking a few night shots outside the refuge, we reach the summit with our frontal shots, from which a unique spectacle opens up: The largest wall in the Alps illuminated by the first rays of sunlight is tinged with orange-pink, leaving us ecstatic.
After having taken some digital pictures, I mount the Linhof large format camera, using the tripod I had left mounted on the summit the previous day. The objective is to take 4 shots on a plate that will make up the 180 degree panoramic photo taken by Vittorio Sella in 1895 of the Macugnaga valley and the Belvedere glacier.
Also today, the weather shows some signs of worsening when the first mounds begin to form at the bottom of the valley. Therefore, I decide to shoot a little earlier than I planned. Even if the shadows will not have exactly the same shape as the historical photograph, I prefer to avoid the risk that the wall becomes cloudy as the day before. The result fills me with joy: we have repeated one of the most beautiful historical picture of Monte Rosa! The enthusiasm of the result is soon accompanied, however, by the bitter awareness that even here the climate changes caused by human beings have drastically modified the mountain landscape.

Today we climbed the Belvedere glacier, the same one we photographed in the last few days from the summit of the Joderhorn, to look for the point from which the Wehrli brothers took a picture of the glacier near the Lake Locce.
Once in the area where the glacier splits into two lobes, the path climbs to the top of the moraine, offering a spectacular view of the glacial basin and the east face of Monte Rosa.
The path continues crossing the glacier and passing from one moraine to another, we are forced to descend several tens of metres. This glacier, in fact, especially in the last 20 years, has undergone profound modifications and only in 2002 assumed a completely different look. The ice completely filled the moraines, even – for an extraordinary effect of mass transfer to the valley – exceeding the height of the historic moraines. Now, on the other hand, it has thinned out to such an extent that in order to reach the glacial surface in some stretches it is necessary to descend almost one hundred metres in altitude.

When we reach the highest ridge of the moraine, near a small chapel, we find the point from which Wehrli had taken the picture I plan to repeat. Also on this occasion, thanks to the comparison between the historical image and the current one, we will be able to testify the enormous change that has affected the glacier. It is in fact evident how the entire amphitheatre under the east of the Rosa has collapsed heavily and the hanging glaciers that descend along the wall are now completely separated from the Belvedere glacier basin.
Once the shot has been taken, we work with the researchers Alberto Cina, Paolo Maschio and Marco Fronteddu from the the Polytechnic of Turin, who are involved in the creation of laser-scanner images which, together with our images on high-resolution film, will make it possible to create a three-dimensional model of the glacier.

We are curious to look for the shooting point of another wonderful picture taken a few hundred metres higher, we continue along the crest of the moraine, seriously compromised by landslides due to the retreat of the glacier. However, we have to desist from the attempt because of a storm that quickly rains down the sky. Luckily, at the first drops of water we find a large overhanging rock that serves as our roof! Roof, in fact, whose cracks are marked by old artificial progression nails. And while we eat our sandwiches, we like to dream that a young Bonatti has been training for the K2 expedition on those rusty nails.

We take shelter at the Zamboni refuge where we find the researchers, who, wisely, did not follow us in our second attempt. A quick coffee and then the descent together towards the Belvedere refuge, where we meet the friends and great experts of the Belvedere glacier, Gianni Mortara and Andrea Tamburini. It is at the same time exciting and sad to listen to what they tell us with competence and passion about their mountains and the fact that they have seen them become more and more suffering in recent years…

At the end of the day, it is time to say goodbye: Gianni and Andrea, who joined us at the Belvedere, Paolo and Alberto from the Polytechnic. They accompanied us from the first days of the expedition, we will see them again perhaps in mid-September on the Calderone glacier. A bit of emotion, a few jokes, the frank and sincere greetings of those who are used to mountains and found themselves in these valleys with the common goal of trying and protect them.

Below is the video of the dispatch and a selection of backstage images.

2 thoughts on “East of Monte Rosa, the Himalayan wall of the Alps”