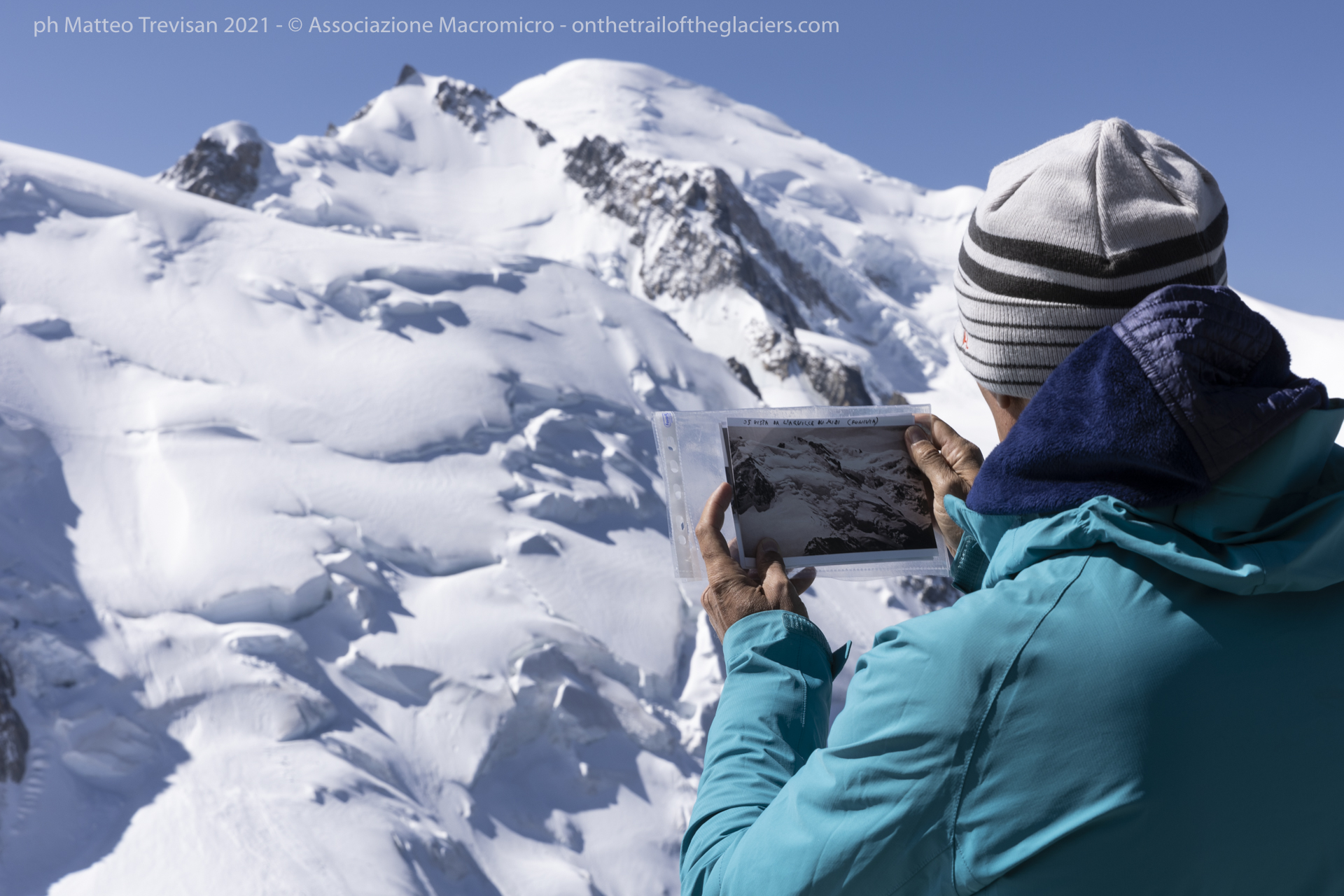 We are finally off! Direction Ailfroide in France. As first stop of the expedition, we will visit the Écrins Massif, where the Barre des Écrins is located, the only 4,000m of this mountain range and also the most western and southern of the Alps. I already visited the area during a holiday with my family and a group of friends in 2012 when my daughters Miriam and Lara were a few years old. Before crossing the border, we will cross the beautiful and wild Susa Valley and then pass into the Briançon Valley, which is just as beautiful in terms of landscape but much more anthropized. On this massif, we will photograph and monitor the Blanc and Noir glaciers, so called because of their characteristics. The Blanc is a glacier almost devoid of rocky debris while the Noir is so called because it is located in a more recessed position between vertical rock walls and is almost invisible under a blanket of debris deposited by landslides and avalanches.

The next day, with Matteo Trevisan and Dario Alaimo, the two collaborators who accompany me in this first part of the expedition, we are immediately on the way to the front of Glacier Blanc, the largest of the massif. After only an hour or so on the way up, I manage to repeat a late 19th century shot of the front of the nearby Glacier Noir with its long and characteristic moraine on its hydrographic left. Half an hour later, despite some difficulties in finding the exact shooting position, I finally succeeded in shooting the front of Glacier Blanc. Both glaciers have had an important retreat, the manager of the Glacier Blanc refuge, our destination of the day, tells us that before 1853, the two glaciers were united at the bottom of the valley at less than 2,000m altitude. At the refuge, as scheduled, we meet the researchers Roberto Ambrosini, Francesca Pittino, Davide Fugazza and Barbara Valle, who are planning several surveys and sampling for glacial ecology studies.

The following day, we wake up at dawn to look for two important photographic positions used by Vittorio Sella in 1883 to photograph Mount Pelvoux and the Barre des Écrins. After finding the correct location and repeat the first shot, we easily find the second one but we have to wait a few hours before repeating the image with the same lighting of that time. The accumulation basin of the glacier, which is the highest flat portion, where the snow only in the worst years disappears in midsummer, has changed drastically. In 138 years, the surface of the glacier has lowered by at least 50 meters and all the imposing seracs, huge blocks of ice as tall as palaces, portrayed in the historical photograph, have now completely disappeared, opening the view to the mountain ridges to the right of the Barre des Écrins.

In the afternoon, we join Roberto and his colleague Francesca to follow and document the sampling that they are doing on the glacier and then return to the valley after a total elevation gain of almost 2,000 meters.

The next day we find two positions from the bottom of the valley from which the French photographer Henri Ferrand took two photographs of the Blanc and Noir glacier fronts.

It is already the 10th of August, and moving to the Mont Blanc Massif, we stop in the village of La Grave from which we repeat a couple of old plates from the end of the 19th century found at the Cessole Institute in Nice that depict the steep north face of La Meije. The splendour of the glittering glacier coming off this magnificent 4,000m peak in the Écrins Massif has faded and now the steep slopes just above the village have turned into rocky slabs and barren scree.

The next morning, we are in Chamonix, the heart of the French Mont Blanc massif. The weather continues to be favourable, so we take the opportunity to immediately go up to the historic viewpoint of Montevers with the characteristic red cogwheel railway train to look for the photo points of the many historical images of one of the most iconic glaciers of the Alps, the Mer de Glace. I had not visited this area since 1999, when I came here with director Gino Cammarota to make a documentary for Geo&Geo, the glacial tongue is now really impressive for its poor condition, depressed in the valley bottom and completely covered by rocky debris. If you then compare it with the images of over a century ago that I had in my hand, it almost seems to see another place. Walking among tourists, I was struck by the comment of a woman who, talking to her husband, said “but the Mer de Glace no longer exists, it has become a sea of rocks”. In fact, once you see the same places, where the historical images were taken, you realize how much the landscape has drastically changed due to global warming, the glacial tongue, now almost three kilometres behind, has sunk to the bottom of the valley and covered with rocky debris. The spectacle of that time has been lost forever.

Once down in the valley, we drink a beer with Prof. Philip Deline, from the Université Savoie Mont Blanc, who has kindly accompanied us during the excursion and we say goodbye to him since he will have to join his wife in Courmayeur.

The next day, we take the cable car up to the Aiguille du Midi (3,848 metres), which literally translates as “Needle of Noon”, since looking at the mountain from Chamonix, at that time, the sun is directly over its peak. From this spire, the view of the Mont Blanc peak is one of the most spectacular and exciting in the Alps. We are here because in 1883, Vittorio Sella, after a long and demanding climb on foot from Chamonix, captured Mont Blanc, giving history one of the most fascinating shots of his long career. After repeating the three images to compose the original panoramic view, we descend with Dario along the sharp ridge of snow leading to the Vallée Blanche from which we find a point of shooting of another image of Sella, which depicts the Aiguille du Midi at the time sculpted only by atmospheric agents. In fact, since 1955, the enormous rocky spur has been completely transformed to offer the many tourist infrastructures linked to the cableway.

On the morning of August 12, we climbed, again with the help of the cable cars, to the Brevent, a peak located upstream of Chamonix but on the opposite side of the Mont Blanc massif. The station manager of the cableway, after asking us what our purpose was, gave us permission to climb up to the roof of the Cabane du Brevent to repeat a panoramic photograph from the beginning of the 1900s of the entire Chamonix valley from the Agostino Ferrari archive. At that time, the Argentiere, Mer de Glacie and Bosson glaciers still reached the bottom of the valley.

Before moving to Switzerland, we climb with Dario to “Le Chapeau”, a refreshment point from where, at the end of the 19th century, we could observe the front of the glacier “Des Bois”, as this lower section of the Mer de Glace was called at the time, which no longer exists today, since it reached the bottom of the valley up to the first houses of Chamonix. In this case, it was even more complicated to get the same shots of that time because of the repopulation of larch trees on both sides of the valley that now almost completely cover the view.

The imposing and severe landscape of these great mountains, now wounded by the effects of climate change, stands out even more for the amount of tourists, who flock to a few vantage points that are accessible thanks to the widespread network of cable cars and iron paths that, since the last century, have allowed a quick but often hasty and superficial approach to these environments. In these cases, the thing that saddens me the most is to see people getting off the various infrastructures and immediately taking a selfie without even looking at the majestic landscape behind them. The lack of attention for the surroundings and their changes motivates me even more to carry out this project, in the hope of raising awareness towards a deeper culture of the environment.