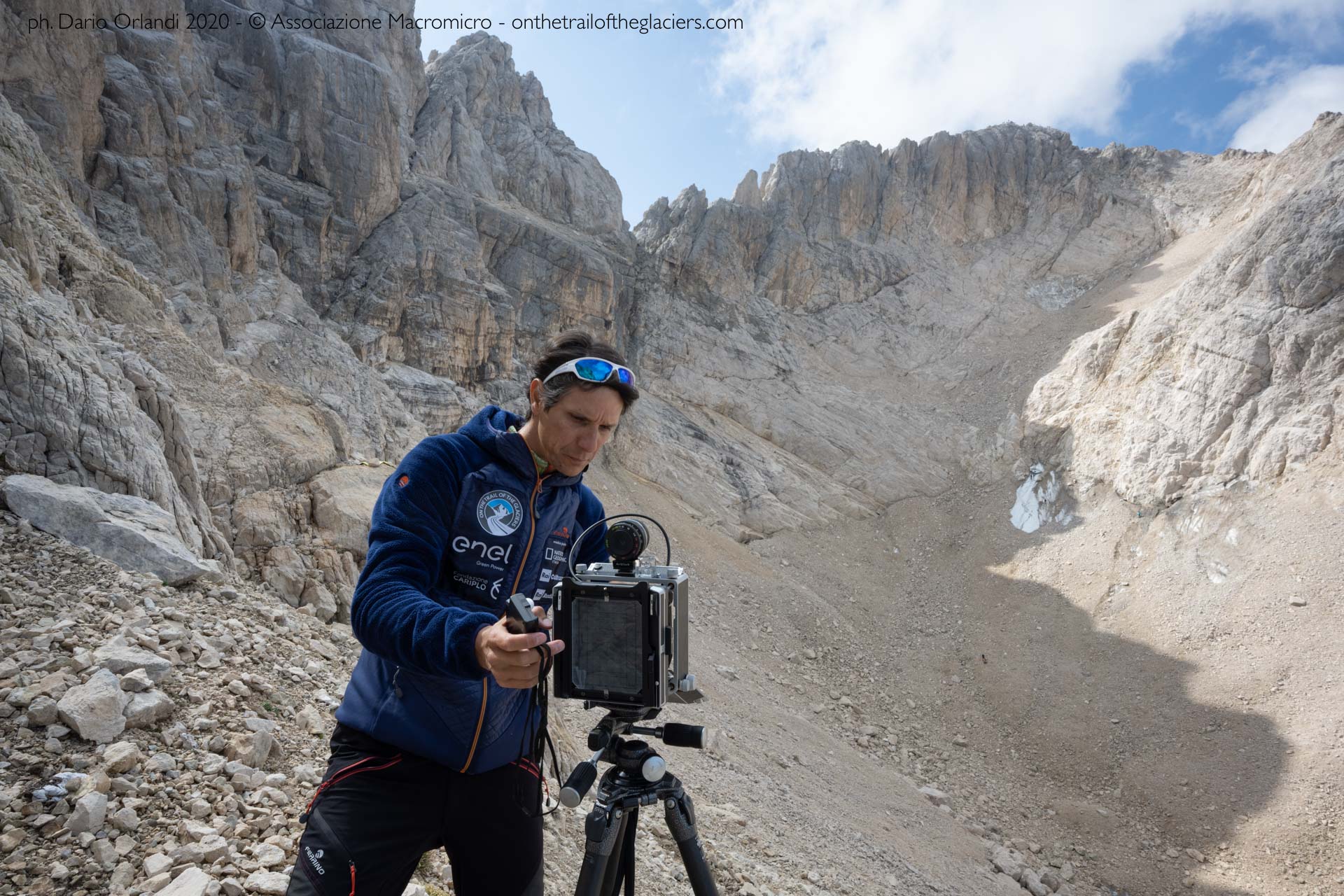 Having completed our fieldwork in the Marmolada group, we resume our journey towards Friuli Venezia-Giulia. Approaching the Falzarego Pass, we cross the valleys most affected by the Vaia storm, the extreme weather event caused by the tropicalisation of the Mediterranean climate. With its destructive power, it put down millions of fir trees in just 4 days in October 2018. The live scenery is impressive and once again, the destructive effects of climate change stand out clearly in our eyes.

Passing through the valley of Cortina d’Ampezzo, we can find the photographic point from which Emilio Gallo, in 1909, took a view of the then small town of Cortina d’Ampezzo, at the time surrounded by large expanses of pastureland. In fact, at Gallo’s time, the mountain economy was still largely based on agriculture and sheep farming, with a consequent strong need for pasture areas; after decades of tourist development and the abandonment of pastures, on the one hand, the woods have regained ground, on the other hand, it is evident the town’s considerable urban expansion.

Arriving in the evening in the area of Mount Canin, we join our friend Renato Colucci, a researcher and glaciologist at the CNR, and we plan together the activities for the following days, during which Renato will be our precious guide.

In the morning, we woke up early and, with the help of a cableway, we climbed to the Celso Gilberti refuge, at 1,800 metres of altitude, from where we walked towards the Bila Pec, a buttress with an extraordinary view over the Canin. From here, at the end of the 1800s, Arturo Ferrucci took a panoramic photograph of the Canin and Ursich chains and glaciers, which at the time consisted of two small glacial bodies with a surface area of just less than one square kilometre. Today, we find a very different situation: the glacier has broken up into small glacial bodies, which glaciologists call “glacionevati”. From the comparison with the historical image, we visually attest the extinction of the glaciers, as Renato confirms, showing us the accurate measurements that are the result of his ten-year research work.

In the afternoon, we move to the opposite side of the valley to reach the Montasio plateaus and to retake another panorama, once again of the Canin chain, which was taken by the photographic team of the Military Geographical Institute in the 1920s.

The next day, having now reached the last stage of our alpine itinerary, we set off to return home after more than 45 uninterrupted days of expedition: a few days of rest before leaving for the last stage of “Alpi 2020”, which will take place on the Gran Sasso – in the Central Apennines – the following weekend.

The appointment for the last stage of the expedition is in Prati di Tivo, the access point to the northern side of the Gran Sasso. These mountains are my second home, I’ve been visiting them and experiencing them in every season for the last 30 years. I am thrilled to be in such an important place for me with the other members of the expedition, all from other parts of Italy, and to conclude this long and fascinating adventure in the Italian mountains here.

The Calderone glacier – located below the summit of the Gran Sasso – is an extraordinary place to observe the effects of climate change, due to its low latitude. Despite the fact that, since 2007, it has been downgraded to a “glacier”, it continues to attract the interest of the scientific community for its peculiarities. On this small Apennine structure, it is in fact possible to study what happens to glaciers at the moment of extinction and to make more accurate predictions about the future and the evolution of Alpine glaciers.

In this mission, numerous researchers will be with us, along with the Sky TG24 crew, and this has required the organisation of particularly flexible logistics in order to allow everyone to work.

In the late afternoon of the 11th of September, we were on our way to the Franchetti refuge in the company of Alberto Cina and Paolo Maschio, the two researchers from the Polytechnic of Turin, who accompanied us at various stages of the expedition to create three-dimensional models of the glaciers, using sophisticated aerial survey techniques. The next day, we plan to look for the shooting points to repeat the historical photos and carry out drone flights to produce 3D models of the glacier.

The next morning, we climbed early along the steep path that leads from Franchetti to the frontal moraine of the glacier and, as soon as we descended, we dived into the large debris basin that only 20 years ago was full of ice. While Paolo and Alberto began to place the markers for the drone surveys, Dario and I climbed along the moraine on the hydrographic right of the glacier – along the path that leads to the eastern summit of the Gran Sasso – to look for the point of recovery used by G. Zanon in 1963. After a long wait, due to the sudden changes in light caused by the unstoppable movement of the clouds, we finally took the two images.

Shortly afterwards, we were joined on the glacier by the Sky TG24 crew. We arranged with them an interview for the IMPACT programme. Early in the afternoon, the team composed of Roberto Ambrosini, Davide Fugazza and Arianna Crosta from the Milan State University, together with Francesca Pittino from the University of Milan-Bicocca, arrived directly from the Lombardy capital to carry out organic sampling on the last strips of the Calderone, to continue the study on biodiversity in glacial environment and to understand how the presence of organic material affects the ablation phenomenon.

Finally, in the afternoon, Massimo Frezzotti, president of the Italian Glaciological Committee, and Massimo Pecci, glaciologist of the same institute, join us, both of them have been studying the evolution of the Calderone for many years. After having updated us on the most recent research related to this area, they accompanied us towards the Eastern Summit to repeat some historical photographs.

The dawn of the following morning received us with marvellous colours and the east face of Corno Piccolo, illuminated by an intense fiery red light. Despite the sudden speed of light changes at this time of the day, I manage to take a sequence of shots to compose a great panoramic view of the wall and the valley below.

We set off early in the morning in the company of Alberto and Paolo, who planned to reach the frontal moraine again and continue shooting with laser scanner and drone. Our plan is to continue towards the West Peak, along the route of the Passo del Cannone, to repeat some images of the upper part of the glacier. A short iron path overlooking the beautiful Val Maone and the Pilastri d’Intermesoli quickly takes us to the normal route to Corno Grande. In short time, we reach the summit and find the point from which Enrico Abbate took one of the first photographs of the glacier on the 19th of September 1886. I have the picture in my hand, I am definitely at the point of the historical shot, but the morphology of the mountain has totally changed. 134 years ago, only a few tens of metres below the Vetta Occidentale, the glacier began its wide and constant descent along the valley below. Today, instead, the wall falls vertically for about a hundred metres to reach a steep slope made up only of unstable stones that slide towards the depth of the basin. The comparison is as shocking as ever, if you think about how the morphology of the mountain has changed, not only in terms of the landscape but also in terms of use. Only 20 to 30 years ago, it was possible to ski down the valley even in the summer, while now the once basin of a small but flourishing glacier is a stony area that cannot be used due to the risk of falling rocks.

Having repeated the shot with the Linhof folding camera on 4×5 inch film, we set off again in search of other photographic points on the summit ridge. Along the way, we met an endless line of tourists, many of them trudging with a certain precariousness and improvisation, crowded to reach the summit. It is an unusual scenario for a mountain landscape. This massive presence once again makes us think about the delicate relationship between man and the environment: if on the one hand it is nice to see so many people approaching the mountain and the importance of the mountain, on the other hand this unusual event clearly shows the impact of humankind on the environment. Upon reaching the summit, a small group of young people approaches me and is curious about our strange filming materials. When they saw the historical photographs I had in my hand, they reacted with great astonishment, mixed with a certain sadness: they could not believe that the landscape had changed so drastically in such a short time and that a few metres below the summit only a few years ago there was a small but flourishing glacier.

After taking some pictures from the summit ridge, we started our descent towards the Franchetti refuge. Along the way, we met up again with the group of young people of the summit. They saw our backpacks full of heavy equipment and offered to help us carry them up to the cable car. I was very impressed by this outburst of generosity and participation, a splendid scene full of hope on the last stage of a long project born out of the desire to make the new generations aware of the huge topic of environmental issues.

One thought on “From the Julian Alps to the Gran Sasso: the circle closes on the “home mountain””