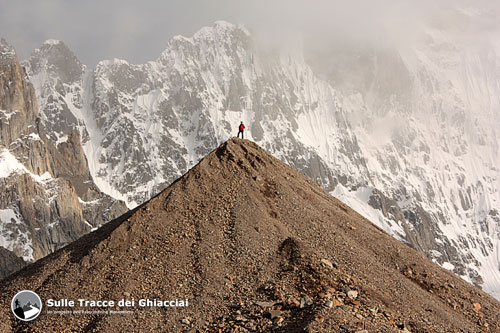 Compared to the landscape’s size you’re normally used, the area of Baltoro is truly breathtaking; apart its length of 60 km (the fifth longest glacier in the world), even its dynamics is surprising in comparison to what is usually seen on Alps or on classic textbooks; in addition to the classic crevasses and moraines, here we can observe various geomorphological shapes (sails, mushrooms, ice cones, etc). Among the many trekkers we have met along our path, when asked about the nature of the pathway and the time needed to reach the next step, they always replied: “Very far with many up and down”, but regardless of distance, where do these continuous ups and downs originate?

Seen from above, the glacier seems to descend into the valley with its moraines and its tongues of ice as a highway with many lanes; but when you observe it with more detail, you immediately notice how its dynamics is related to the continuous formation and disintegration of huge cones of ice covered with debris. The debris, protecting the ice from depletion creates cones of ice in relief over the surrounding landscape, and when the slope of these cones increases beyond a certain angle, the debris slides along the sides exposing new parts of ice to solar radiation, leading to the disintegration of the ice cone; at the same time, however, starting from the coverage detritus resulting from the disintegration of the cone, a new ice cone will take place and the cycle begins again.

Instead, when on the surface of the debris there are large boulders, we have the formation of the well known ice mushrooms, related to the processes of differential ablation between the ice exposed to solar radiation and ice protected by the shadow of the boulder. These shapes, and in particular the huge cones of ice, make the route very difficult and full of ups and downs.