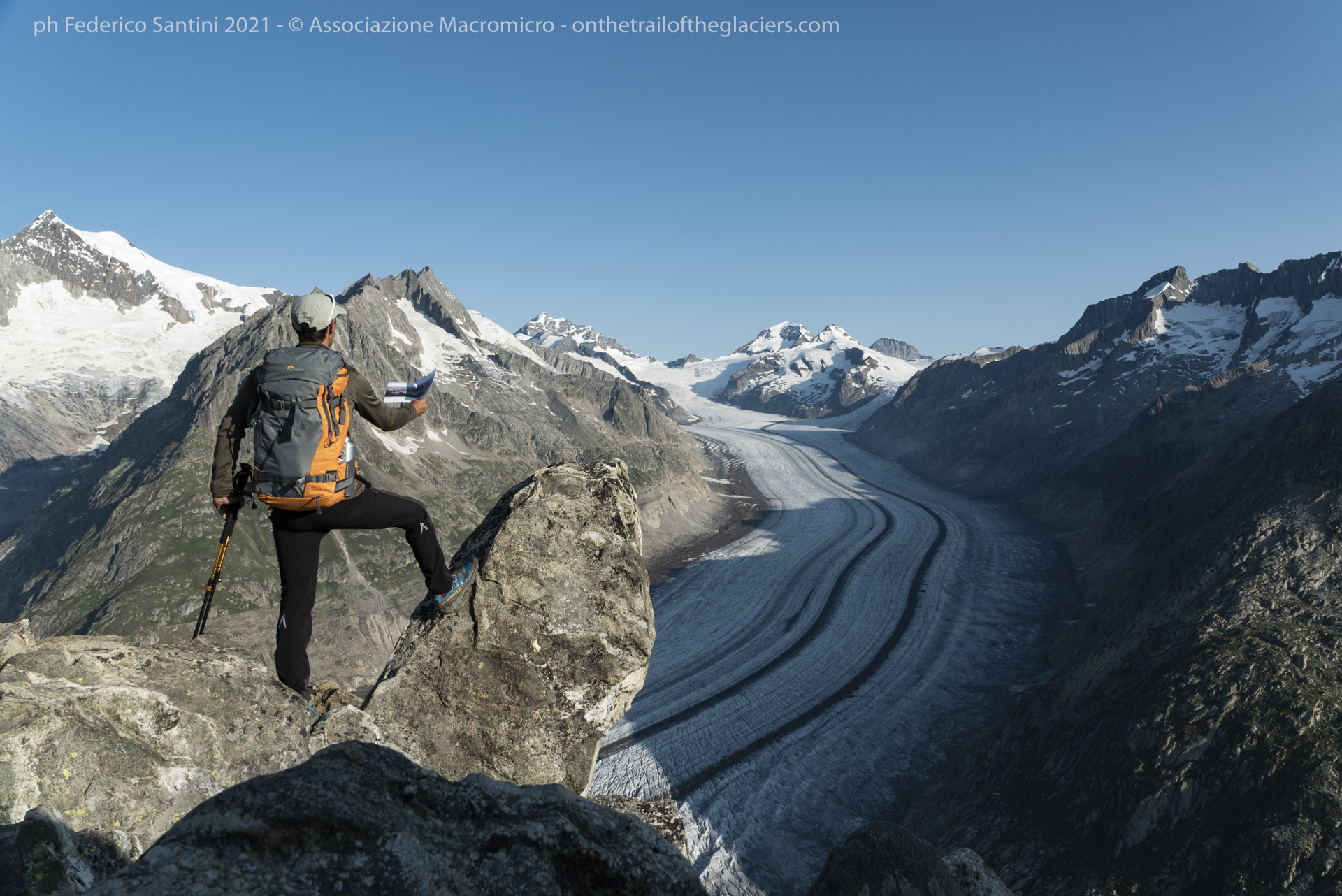 Today is the 15th of August and me and my travel companions Marco Manni and Dario Alaimo find ourselves in the Valais Canton in Switzerland. As scheduled, we reach Zermat and then climb to the Gornegrat (3,100 meters) with the characteristic cogwheel train. From this mountain, we can admire more than 20 peaks among the 4,000 of the Alps and our goal is to find the photographic points from which Jean Claude Marmand in 1865 took a sequence of pictures to form a panorama of more than 180° of field of the huge Gorner glacier.

As soon as we got off the train, I take the historical photographs from my rucksack to compare the surrounding landscape with the picture of 156 years ago. The view is wonderful, with just one glance you can see, from the right, the elegant and steep east face of the Matterhorn, the Breithorn ridges and the many peaks of Monte Rosa. From a first comparison, some of the ridges in the foreground do not line up as they do in the historical photograph, so we decide to continue on the ridge towards the Stockhorn, another peak further east.

After several ups and downs and the search for clues on the ground that can confirm the exact position from which the historical photograph was taken, we find ourselves going back on our steps to the belvedere. Once again, we reach the point from which we had started, we realize that the sequence of shots had been taken from the terrace. After a careful analysis of the framing, I position the tripod on the bubble and make all the ridges in the foreground coincide with the mountains in the background as in the historical photograph and I start the series of shots. Soon after, I find a new point to make another panoramic photo, this time back from 1890, by 25 years more recent. Once the morning is over, we start to walk down towards the Riffel pond, from which I repeat a beautiful shot of the Matterhorn reflected in the water mirror. This comparison will be useful to highlight the contraction of the upper part of the Furgg glacier, fed by the avalanches coming from the eastern face of the Matterhorn. Once arrived at the Riffelberg station, I repeat a shot of the homonymous refuge, but in front of the frame, today there is the huge arrival structure of the cable car. Tired from the long day at high altitude and sunburnt, we take the little train to go down to Zermat.

The following morning, we reached the Schwarzsee lake on the opposite side of the Gorner valley, from where we started the ascent to the normal route of the Matterhorn. As we descend the steep grassy slopes, we find three points in the course of the whole day, from which I can repeat three historical photographs depicting the enormous frontal tongue of the Gorner glacier descending into the valley towards Zermat. Thanks to these important comparisons, we are able to witness not only the frontal retreat of the glacier of about 2.5 km, but the total disappearance of 150 meters of ice thickness in this portion of the valley.

On August 17, we remain in the valley to work on post-production and backup of all materials made during the first part of the expedition. Filmmaker Federico Santini and friend Enrico Vicenti join us while Dario Alaimo says goodbye. The next morning, we are again operational in the field and with Federico and Enrico, once again with the train, we reach Riffelberg, but the fog formed in the valley of Zermat due to further days of high pressure, continues to immerse us, completely covering the surrounding landscape. Only after waiting for over two hours, the sun manages to disperse the fog and allows me to repeat Vittorio Sella’s splendid shot of the east face of the Matterhorn with the Furgg glacier tongue, which in 1883 descended to the arrival point of the Schwarzsee cable car. The comparison is pitiless, where there was a glacier, today there is a cable car station, as if to show the anthropic impact.

As planned, we are now starting to work on the Great Aletsch Glacier, by far the largest glacier in the entire Alpine region, with a length of 21 km and a surface area of 78 square kilometres. This enormous mass of 11 tons of ice has formed at the base of the Bernese Oberland’s major peaks such as the Eiger, Mönch and Jungfrau. The Aletsch region is a UNESCO World Heritage Site and has a Himalayan-like appearance. Despite its size, it has declined considerably, due to global warming. There are many historical photographs that we were able to select from the various archives in Zurich and Bern, in fact we planned to stay in this area for at least four days. Our base, thanks to the hospitality of the tourist office of the Aletsch Arena, is located in Fiescheralp at 2,200 meters above sea level, from which, early on the 19th of August, together with Federico, Enrico, Marco and our friend Jacopo Pasotti, who accompanies us for a day, I start to walk to reach the small lake Marjelen.

This small and wonderful valley is located at a point, where the great glacier makes an almost sharp bend, from which, historically, blocks of ice as high as palaces were detached, forming the famous lake from which the valley takes its name. Today, the glacier is still present but has lost more than 150 meters of thickness and laps a little the valley without forming either the lake or any ice wall. The search for photographic points, as always, begins with the one taken in the early morning hours and then continues with those taken in the afternoon. The importance of repeating the historical shots at the same time of day is fundamental in order to obtain the same shadows that will give those, who observe the comparison, the perception of seeing exactly the same landscape. After going up the valley and repeating two first shots back from the end of the 19th century from a saddle and the slope below, we descend again to look for a masterful shot taken by Vittorio Sella in 1884 of the enormous wall of ice that formed right, where the Aletsch curves towards the wild Massa Gorge. Here too, the landscape has changed dramatically, the loss of thickness of the glacier has opened up the view of the valley and the slope to the hydrographic right. After finding a new point to repeat two 30×40 cm plates that Sella had taken in the afternoon, we walk back to the hotel where we will spend a pleasant evening in the company of Michael Zemp, the director of the Word Glacier Monitoring Service (WGMS).

The following day, Michael tells us not only about the history of the Aletsch Glacier but also about the great research and awareness work that they carry out with the WGMS. We reach the village of Belalp, from which we will repeat the important and very old photographs taken by the Frenchman Adolphe Braun of the frontal part of the glacier. The oldest one dates back to 1856, when the glacier was at its maximum expansion at the apex of the Little Ice Age. Thanks to these comparisons, we will be able to highlight not only the emptying of the entire valley due to the glacial regression with the consequent erosion of the various slopes, but also the appearance of the various tourist infrastructures such as the cable cars that today overlook the crests.

Today, the 21st of August, thanks to the support of the tourist office of the Aletsch Arena, which allows us to use the chairlift early at 7:00, I climb with Federico, Marco and Enrico on the Eggishorn peak from which you can enjoy a breath-taking view over the entire Aletsch glacier. Just from this peak, I repeat two important panoramic views that embrace the entire glacial tongue, after identifying the exact points where to place my tripod. The first one dates back to the end of the XIX century, while the second one dates back to 1865, therefore it is of great historical value.

The air is crystal clear and allows us to see on the horizon not only the peaks of the Eiger, Mönch and Jungfrau but also in the distance those of Monte Rosa, the Matterhorn and Mont Blanc, a unique spectacle! By mid-morning, we decided to descend along the ridge that brings us back to the saddle, from which I had repeated the photos of the area of Lake Marjelenbecause. From there, I thought I could easily find the point of a shot that portrays the Fiesch glacier, another large valley glacier, I thought though, because this was not the case. In fact, walking on the ridge above the lake, we were forced to lower our altitude more and more to find, only after a few kilometres and more than an hour of walking, the exact point, from which the historic photograph was taken. Despite the fatigue of walking off the trail, as often happens in cases like this, the view is wonderful and we enjoy the landscape sliding down to reach the path that will take us back to our base camp, where this long but very successful mission will end.