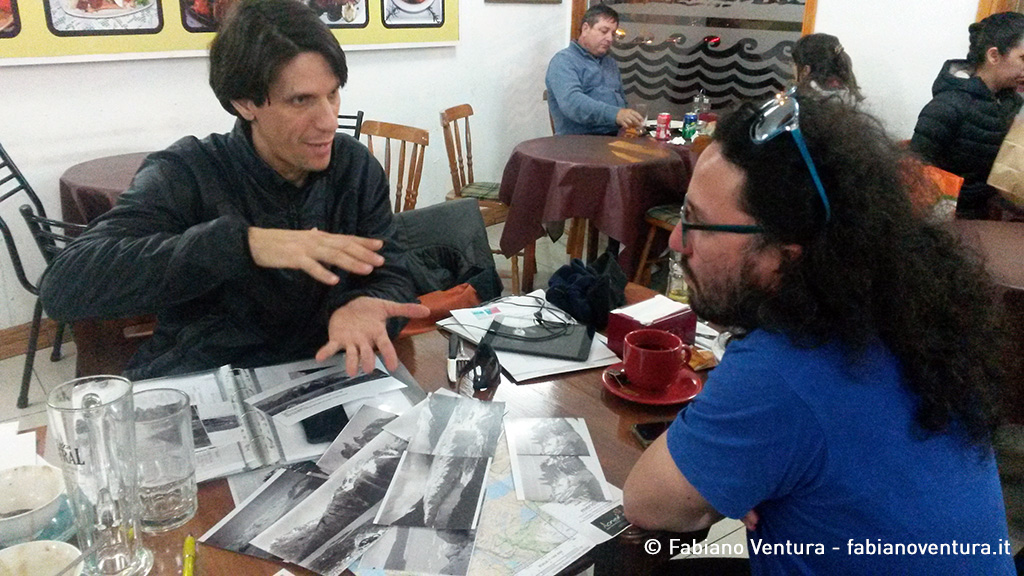 The first week of the expedition is dedicated to carrying out photographic research and last minute logistics. Today we crossed the border that separates Argentina and Chile and are now in Punto Arenas for a meeting with Carolina Vidal, the woman in charge of the Maggiorino Borgatello Museum photographic archive.

“What a thrill to be here! At last I can study the original photographic plates that belonged to Alberto Maria De Agostini, the Italian explorer, photographer and Salesian missionary who worked in the Tierra del Fuego for over half a century (from 1910 to 1960). I am already familiar with these photographs, and have pored over them for years, but now that I am actually in the museum that houses his entire collection of photographs and film footage, I gain insights into how he archived this material and can clear up a number of doubts and, as I had imagined, I have come across new photographs that add information that is going to prove invaluable for the comparative photography project I am about to embark on.

We have dinner with Cristian Valle, the film-maker who is going to help with the executive production of the documentary in Chile.

Sunday morning – we leave our house and are buffeted by gusts of Patagonian wind that, as expected, have intensified overnight. After a first class Chilean breakfast in the only bakery open in Punto Arenas we make our way to the Borgatello Museum, which has opened its doors especially for us to carry out our research.

To begin with we need to understand how the archive is organized with a series of questions to the Museum’s archivists, Carolina and Barbara. Following that, I quickly begin a systematic approach and begin to draw up a picture of the archival system De Agostini devised, and of the formats he preferred to use. As I imagined, here there are many more photographs than those featured in his published works, some of which the Director of the Museum, Salvatore Cirillo, had already shared with me in recent months. Gradually, I piece together images of the same places where I will shortly repeat the same shots.

The next day I was thrilled to discover that the famous panoramic photograph of the enormous Upsala Glacier, which appears in the “Patagonian Andes” book, is composed of seven rather than three photographic plates. This discovery obviously gives me the opportunity not only to take a new look at De Agostini’s work, but also to have a broader understanding of the glacier and how it has changed.

Following the research work at the Museum we turn our attention to logistics. At an official presentation to CONAF (the government institution responsible for Chile’s national parks) we sense enormous interest in presenting the findings of the project right here in Patagonia. Later on we meet Mauricio, Chief Executive of the HYST Association of hotels and tourist infrastructure in the Torres del Paine National Park, an enthusiastic supporter of the project, who confirms the Association’s logistic support for our expedition throughout the park area.

On the Trail of the Glaciers Ande 2016 dispatch 01 from Fabiano Ventura on Vimeo.