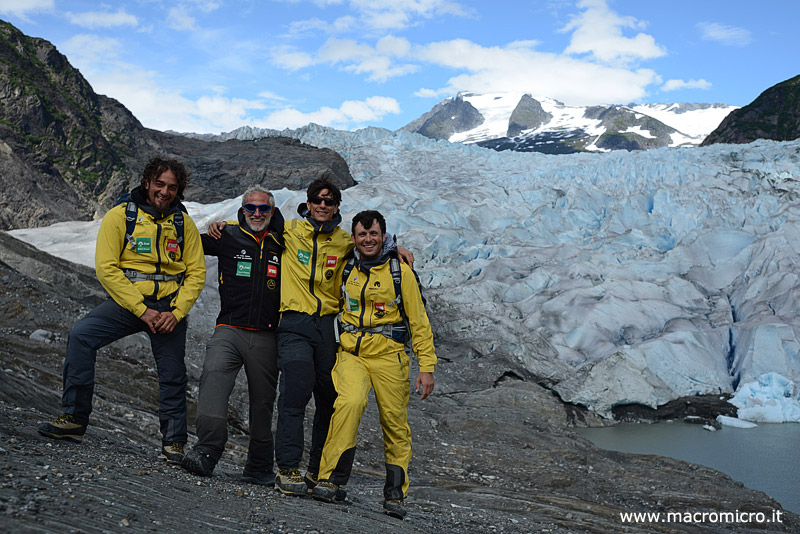 The ‘On the trail of the Glaciers’ expedition arrived in Juneau, the capital of Alaska, on the 23rd of July. During the first week efforts were focused on organizing logistics, selecting some images at the Juneau State Library and meeting local researchers (Roman Motyka and Jamie Womble) who will work with us often on the field. In the very few days of good weather the team managed to reach the terminus of the Mendenhall Glacier, an enormous glacier that ends in a lake basin, and evaluate it’s notable retreat that started over a century ago. On the 27th the team embarked on a four-hour ferry journey to the Gustavus base camp, a small village that serves as a logistics base and entrance point to the Glacier Bay National Park and Preserve, place where the team will carry out most of their photographic endeavors.

Before entering the park the team had to do an orientation course in preparation for working in the wilderness – the park is in every aspect a designated wilderness area where man finds himself totally isolated. Black bears and grizzly bears roam at their leisure, something that needs to be taken seriously – for safety reasons – before embarking on an expedition.  Our first mission, which should have lasted 3 days, failed yesterday due to an engine malfunction of the boat that was taking Fabiano Ventura, Riccardo Scotti and cameraman Federico Santini to the Mount Wright area, an important site where many images will be taken of the Muir Glacier.

2 thoughts on “The expedition arrives in Juneau”