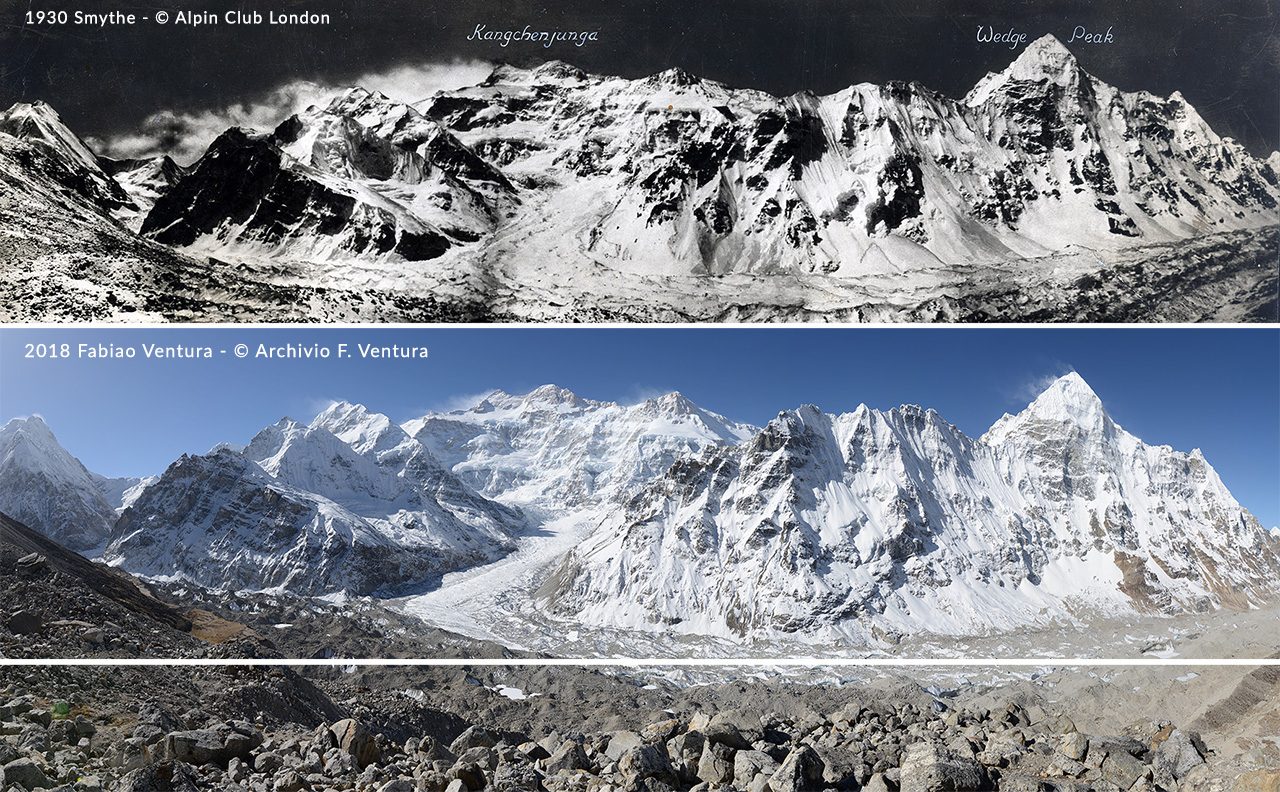 The expedition moves on at a rapid pace. Over the past couple of days we have climbed up the Ghunsa river valley towards the base camp of the world’s third highest mountain, Kangchenjunga. The Himalayan mountain landscapes that surround us are simply breathtaking and the sense of awe they provoke has helped us cope with the fatigue. We set off at 7am a couple of days ago from Ghunsa, a small mountain village, described as a wondrous Nepalese pearl by William Freshfield in “Round Kengchenjunga”, the book that narrates his expedition here 119 years ago. After four hours of walking across frontal moraine at 4,050 metres it began to rain. When we eventually reached Camp Kambachen, and while mounting our tiny tents, our porters told us they had no choice but to return to the village because the lodge where they planned to spend the night was closed. The lodge keeper was absent because April 30th is the anniversary of the Buddha’s birth, which means locals gather to celebrate at Ghunsa.

At Kambachen the plan was to spend two days taking the first of our scheduled repeat photographs. I planned to climb up several hundred metres of one side of the valley to find the exact spot from where Vittorio Sella took his panoramic shot of the Jannu Glacier in 1899. Unfortunately, the weather took a turn for the worse and we decided to wait until the next day. The next morning I got up early and popped my head out of the tent only to find the warm snorting snout of an enormous yak staring me in the face as it calmly grazed undisturbed. The weather seemed to be improving, and since I had verified that Sella’s historical photographs had been taken late morning, we took our time and made the most of the sun to dry out our tents, sleeping bags and the rest of our material. Unfortunately by lunch time the sky darkened again and it began to snow. The weather changes quickly around here despite the high altitude due to the humidity rising from the nearby rain forest. The next morning we woke to discover there had been a snowfall in the night, which meant we had to move on to base camp at Kangchenjunga and postpone the repeat shot of the historic photograph until our return.

The following day we decided to split the following stage over two days, sleeping in an immediate camp. This helped us to acclimatize to the high altitude more gradually and have more time to find the exact spot from where Vittorio Sella captured one of his extraordinary images of the confluence of the Kangchenjunga and Ramtang glaciers. The next day I managed to find the same blocks of stone discernible in the foreground in Sella’s photo and so was able to repeat the same historical shot, highlighting the changes that have taken place to two glaciers that no longer run into each other. Thanks to comparative photography we could see how the two glaciers combined into the same ice flow a century ago.

And so we moved on along our path and reached Lhonal at an altitude of 4.750 metres, discovering what looked like a lunar landscape. Here we came across the footprints of a wolf, a she-wolf and cubs that only some hours before had moved across the sands of a dried up river bed. The next day we woke up to find forty blue sheep, a wild variety of Himalayan goat, quietly grazing. Apart from the many wonders of the natural world, we also came across the first ailments provoked by the high altitude and the scarcity of oxygen as headaches and dizziness began to be a serious issue.

At long last we reached Kangchenjunga base camp during the early afternoon of May 4th. We weren’t able to see the mountains surrounding us due to low cloud cover. We are now at 5,100 metres and at this altitude we need to rest for a couple of hours before having dinner. We also have to get our equipment ready for an early start the next day, when we woke up at 5.30am to perfect weather, an amazingly clear sky and the first rays of the sun that made the four 8,000 plus metres high peaks of Kangchenjunga look like flickering red flames. The mountains are impressive with their north face covered by hanging glaciers. The headache I woke up to goes away after breakfast and all our energy becomes focused on the research for the locations where we can repeat the photographs taken by Sella and Smythe.

The ascent suddenly becomes steeper and more arduous. We have to make our own way as the old mountain route has been swept away by rockslides. Just 200 metres higher than base camp I managed to repeat the first panoramic shot taken by Smythe, a photographer who took part in the British Alpine Club expedition of 1930. Later on, following a long stretch crossing constantly shifting scree we climbed a further 100 metres and managed, thanks to a collective effort and sense of fulfillment, the place from where Vittorio Sella captured one of his most spectacular panoramic images of the Kangchenjunga Glacier. Andrea and Federico help me find the exact location thanks to the presence of huge blocks of stone in the prints of archive photographs I have brought along with me. These are very special moments for me, and in a state of exhiliration I begin to go through a long checklist of operations, a sort of ritual as I carefully get ready to take a shot with my Linhof camera.

The landscape is truly breathtaking seen from this strategic viewpoint, which looks out towards the matchless sight of the confluence of two glaciers at an altitude of 5452 metres. After taking a series of photographs we disassemble the equipment and make our way back to base camp before night sets in. We feel exhausted, still not acclimatized to the altitude we have to take regular breaks to rest and regain our breath. Base camp seems miles away, but gradually we reach it. Here we can enjoy a well-deserved rest in the shadow of the sacred mountain that towers above us.

One thought on “Kangchejunga, the world’s third highest mountain.”