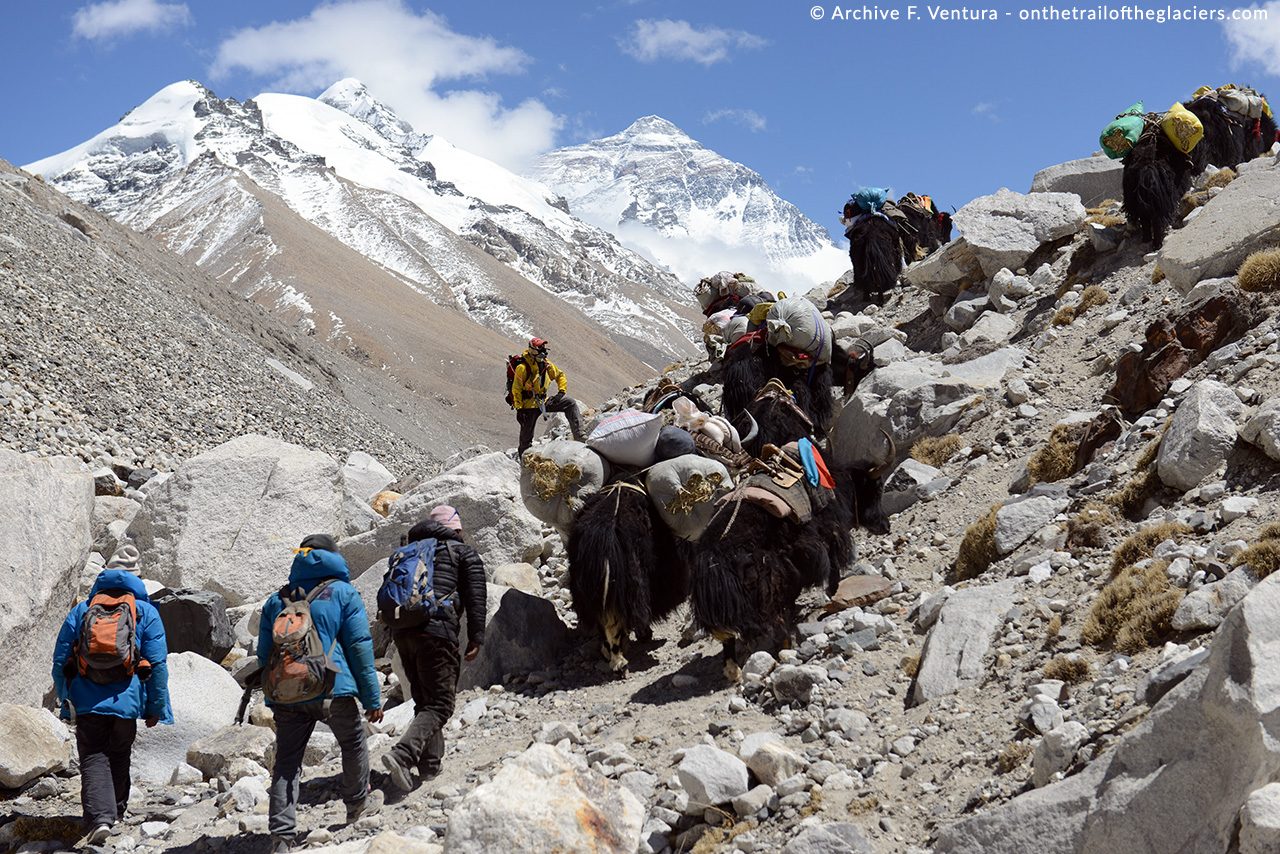 We have completed the first part of the expedition and are back in Kathmandu and need to know if the Chinese Consulate is going to issue us with a visa to enter Tibet. We have an appointment at the Consulate the morning after our arrival and are received by the Consul himself. The meeting turns out to be long and complex. We are asked a series of questions and leave not knowing if the visa is going to be granted or not.
The following day we prepare our equipment and material for our departure as we cannot run the risk of losing a day.
The next afternoon our agency contact sends me a message saying “you have VISA!” We breathe a sigh of relief and set off. Once again luck has smiled on us.
To reach the border with Tibet by 14.00 hours we have to leave at 04.00 hours. The road couldn’t be in a worst state and, only just out of Kathmandu our driver has no choice but to use the full four wheel drive. After a long journey and ten or so road blocks we reach the border without any major difficulties. On the other side of the bridge Bhakdo, our Tibetan guide, is waiting for us with a team comprising a cook, driver and two porters. In the afternoon we reach Kyirong, a small town at an altitude of 2800 metres. The town is in the process of being rebuilt as the result of the opening of a new customs checkpoint on the border between Nepal and Tibet.
The following morning we take our time and set off after some last minute purchases. After a couple of kilometres the landscape undergoes a radical transition as we move from the green valleys of towering conifers to the typical desert landscape of the Tibetan high plain. We head east and arrive at Xegar at 4400 metres, while the next day we head south, passing through the Kya Wu Lha pass, from where we admire spectacular panoramic views of the Himalayas. In the early afternoon we make it to Everest base camp at 5200 metres.
Once our tents are mounted I make a final selection of the archive photographs I intend to take repeat shots of and we prepare the equipment required for the first day of trekking in search for the exact spot where the photographs were originally taken. We go to bed tired and dizzy due to the high altitude.

The weather the next morning is wonderful, and the north face of Everest lies just before us, awe-inspiring. After a quick breakfast we begin the ascent along the mountain path alongside the left moraine of the Rongbuk glacier (orographic right). It’s intensely cold and a strong wind is blowing, which forces us to cover our nose to breathe more easily. After about two hours I begin to recognize the landscape and the spot from where I believe I can repeat the historical shot I chose from the archives of the Royal Geographical Society. Andrea and I are forced to climb over the lateral moraine. It would appear that the 1920s British Everest expedition also had to climb over the glacial moraine, which was then tens of metres higher.

We begin to feel the impact of the high altitude and have to stop several times. Once at the exact spot, I take the shot with the archive photograph gripped in my hands. Our altitude metres (watches and Garmin GPS) all register over 5500 metres. As we suspected, most of the Himalayan glaciers have lost mass in terms of thickness. At the centre of the main branch of the Rongbuk Glacier an enormous glacial lake has been formed, clearly due to the melting of the surface. Lakes of this sort are a danger for those living downstream due to the risk of moraine dykes collapsing, which would lead to large scale flooding. We rejoin Federico and the rest of the team and make our way to our next objective. We realize that we are overtired and that there isn’t enough time to take another shot. So, we decide to return to base camp and have a full day’s rest.
However, the next day we fail to follow through on our good intentions and Andrea and Federico make their way to the Rongbuk Glacier front to carry out GPS measurements and gauge the exact position, while I take three repeat shots of the glacial front with the help of two porters. I then begin the ascent of the steep crest that will take me over 5800 metres. It was here in 1921 that Major Wheeler photographed the entire main branch of the Rongbuk Glacier. The view at this height is spectacular and the loss of glacial ice mass made clear by the erosion of lateral moraine. From this strategic position I take many more photographs of Everest using my folding Linhof on 6 x 9cm film, including a panoramic shot which clearly reveals the area previously occupied by the glacier during the “little ice age” (from the mid 1350s to the mid 1850s).
We intend to spend the last two days at high altitude and make plans to proceed to base camp at 5500 metres, where we will sleep, and where I will celebrate my birthday. This entails relying on two yaks, the animals used to transport goods on the Tibetan high plains. The next day we move along the eastern branch of the Rongbuk Glacier in an attempt to reach an altitude of 6000 metres in order to repeat the panoramic shot taken by Major Wheeler during the first British expedition to Everest in 1921. Once at the intermediate camp at 5800 metres (the advance base camp is at 6400 metres) we decide to rest. We feel exhausted and to continue would be risky, especially for our porters, who are not sufficiently well equipped to cross the glacier and climb large and steep moraine.
Giving up a project that has been carefully planned over many years is far from easy. One feels the bitterness and disappointment of defeat, but to learn how to give up can also be a lesson in being humble. Not to mention that at these altitudes a logistic error can be fatal, and I have no intention to put my life or that of others at risk.
So we decided to go back on our tracks, arriving at Base Camp when night is about to fall. We have a bite to eat and, worn out, we go to bed thinking that the expedition is not yet over as the following day we are going to move on to the Cho Oyu Base Camp, the sixth tallest mountain in the world.

Below is a video and a selection of backstage images