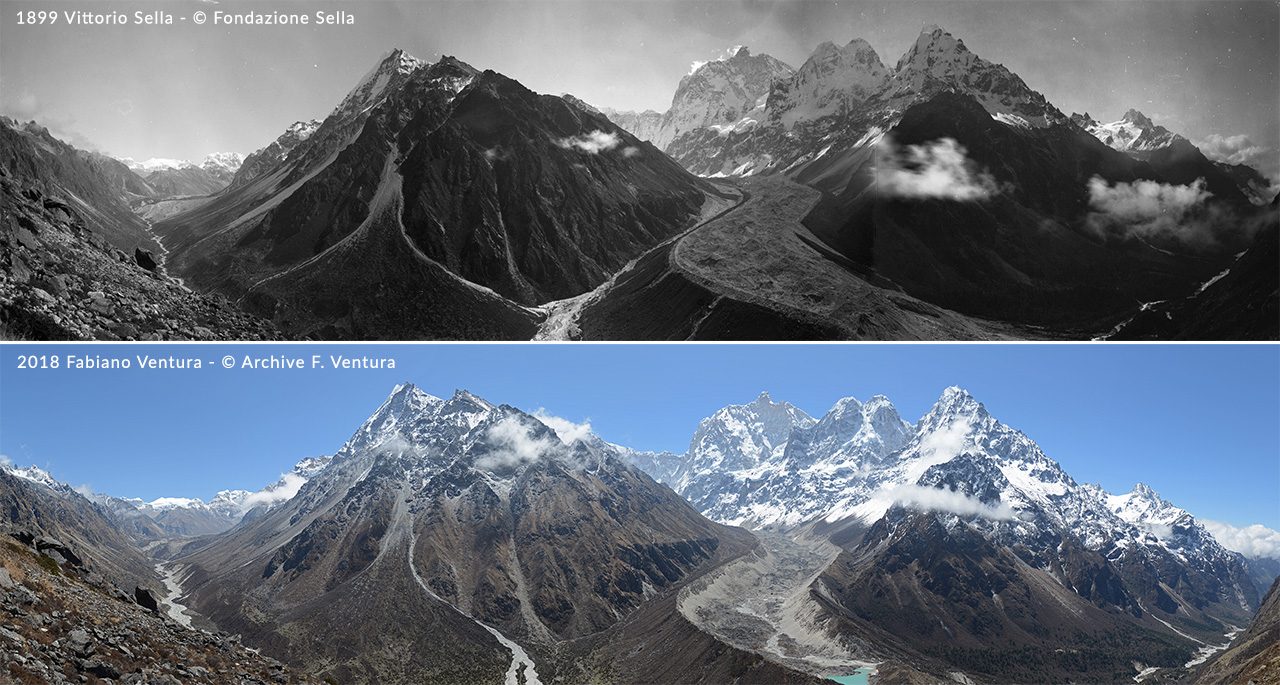 After the high-altitude exertions of the previous day we decided to set the alarm clock at a reasonable time and got up at 7am. I emerged from my sleeping bag and shook off the frost that my condensed breath had formed and switched on the light of my tiny tent. Before me lay the peaks of the colossal Himalayas, struck by the sun’s first rays. We are at the Kangchenjunga base camp at 5200 metres and it isn’t particularly cold, just a couple of degrees below zero. The sky is clear and the moment I step out of the tent I notice how hard it is to catch my breath.

Lakpa, our cook, serves us breakfast very respectfully, as if we were a late nineteenth century British expedition. Once we have finished with the daily ritual of dismounting the tents we prepare for a long descent.

Before setting off I choose the archive photographs that match the views I think we will come across along our trail, and discover that one of the shots from the English Alpine Club was taken fairly close to our base camp. I look out from a natural balcony consisting of glacial detritus, formed by the retreat of the glacier and I tried to find the exact spot from where Wildman, a member of the 1930 expedition, had taken his photograph. The scree and sharp gradient make it difficult underfoot and I struggled to find a stable place to set up my tripod. As I prepare my equipment in such a precarious position it occurrs to me that 88 years ago the English photographer took the shot while conveniently standing on a clearing in front of his tent.

Descending the lateral moraine of the enormous Kangchenjunga Glacier a few kilometres lower down, I come across the place where 119 years earlier in 1899 Vittorio Sella, a member of the Anglo-Italian expedition led by William Freschfield, took one of his photographs using 30x40cm plates. In order to achieve the same distorsion created by the lens and plates used by Sella, and so achieve a perfect superimposition of the shots, I decide to use my folding Linhof on 4 x 5 inch film and manage to reproduce the same shot. A glance at the two shots was sufficient to confirm that landscape around the glacier as it now stands has undergone an enormous transformation. The glacier is now some 200 metres lower, in a depression between two walls of terminal moraine, which have partially crumbled following the collapse of the mass of glacial ice.

We reached Lonack in the early afternoon and pitched our tents and then retired to the canteen tent for a tea with Yak butter.

The following morning Andrea and Federico, together with our guide Prem set off at dawn to reach the face of the Kangchenjunga Glacier and, on schedule, carry out a GPS survey of the entire glacial front to complete the work being carried out by researchers at the Department of Environmental Science of the Università Statale in Milan using satellite technology. In the meantime I wait for the porters to arrive. By this stage we have got to know each other quite well and we often joke in a comic language somewhere between Nepalese and English. I try to understand their customs and habits. Almost all are very young, between 15 and 24 years of age, and belong to the Sherpa population. The name of this ethnic group has given us the term we commonly use to describe the porters who are essential to the success of any high-altitude expedition. Without them it would be impossible to transport the hundreds of kilos of equipment and food required for one or more months of self-sufficiency in remote areas. One of their characteristics that struck me in particular, and which lies at the heart of Sherpa culture, is their great respect and consideration for the dignity of humankind. Even when an individual breaks a moral code, the incident is deemed to concern the person concerned and never leads to publicly-expressed contempt. For the Sherpas it is not so important to strike a heroic stance, but rather to be mild-mannered and prudent. It is considered less important to own great wealth than to share whatever one has with the needy and to demonstrate generosity and hospitality on festive occasions and religious feast days. Such are the characteristics that a person should possess to merit appreciation in this community.

On arrival at Kambachen, our base camp for the following night, I started to prepare my equipment for the next day, hoping for good weather. I had only this opportunity to climb a steep slope for about 500 metres, where I hoped to find the exact place from where Vittorio Sella took one of his most famous photographs 119 years earlier – a splendid shot of the Jannu Glacier, which clearly showed the mass of glacial ice between the lateral moraine. I have known this photograph since I was a kid, and whenever I looked at it I imagined an enormous dragon lurking behind these 7000 metre high mountains.

The next day, after about an hour and a half of strenuous climbing across grassy slopes and a series of hillocks, I came across the exact point from where the shot had been taken and, as always, the match was perfect except for the glacial mass, which has withdrawn by more than a kilometre compared to 1899. What is more, comparison of the two photographs reveals how the glacier has dropped by over 200 metres between the lateral moraine walls, which are composed of rocky detritus, and are practically in the same position.

A comparison of the two photographs is simply astounding and it is hard to find the words to describe what they reveal.

We pack our equipment and hastily descend the valley, making for the only bridge that will allow us to cross the large glacial river. We make our way across the moraine scree of the Jannu Glacier, at times very steep, and then we enter the forest of rhododendrons once again with the undergrowth dotted with yellow narcissus. On arrival at the village of Ghunsa we find the weather much better than during our outbound journey and we discover that the village is as charming as described by Freschfield

In the morning we wake to find the weather has turned wintry cold and the thunder is rolling out as it begins to snow and in no time the area turns white. We delay our departure by an hour to give the weather the chance to clear up a little. We make our way down valley to Phole, a village inhabited by Tibetan refugees who make a living from agriculture and artisanal products such as necklaces, rugs and wool made using traditional techniques. To help this small community we buy some of their produce and drink their traditional tea with yak butter, which helps build up our strength for the long trek to Amjlosa that lies 1200 metres below us.

That evening I work on some email correspondence while the rest of the team falls asleep. Just before I switch off the satellite modem, I receive some bad news. Our tour operator informs me that we have to return to Kathmandu without delay because the Chinese Embassy there had not approved our visa application to enter Tibet and the Chinese Consul wanted to meet us to discuss the issue. Unfortunately, this was not the only piece of bad news. The next day I receive another message informing me that the Tibetan Mountain Association, following instructions from the Chinese Minister of the Environment, has revoked all permits released for the Mount Everest area. The reason for this appears to be the amount of garbage found there by a delegation from the Ministry. However, we were also told that our permits had been released, but for only six days and with a condition, that we were not to go higher than 5800 metres.

I immediately realise that such a limitation would compromise the work we want to carry out in Tibet, on the understanding of course that we receive a visa.

As if that wasn’t enough, during the next stage we are hit by a violent pre-monsoon storm that forced us to change route to avoid an area subject to landslides and which, in any case, was too exposed. Despite falling into the mud, we manage to arrive safe and sound in the village of Tapletock.

For the next stage we decide to hire a four-wheel drive vehicle that, over two days and 25 hours of exhausting driving through the Nepalese rain forest, brings us to Birthnagar, where we take a domestic flight to Kathmandu at long last.

One thought on “Descent to the Jannu, an enormous transformation of the landscape”