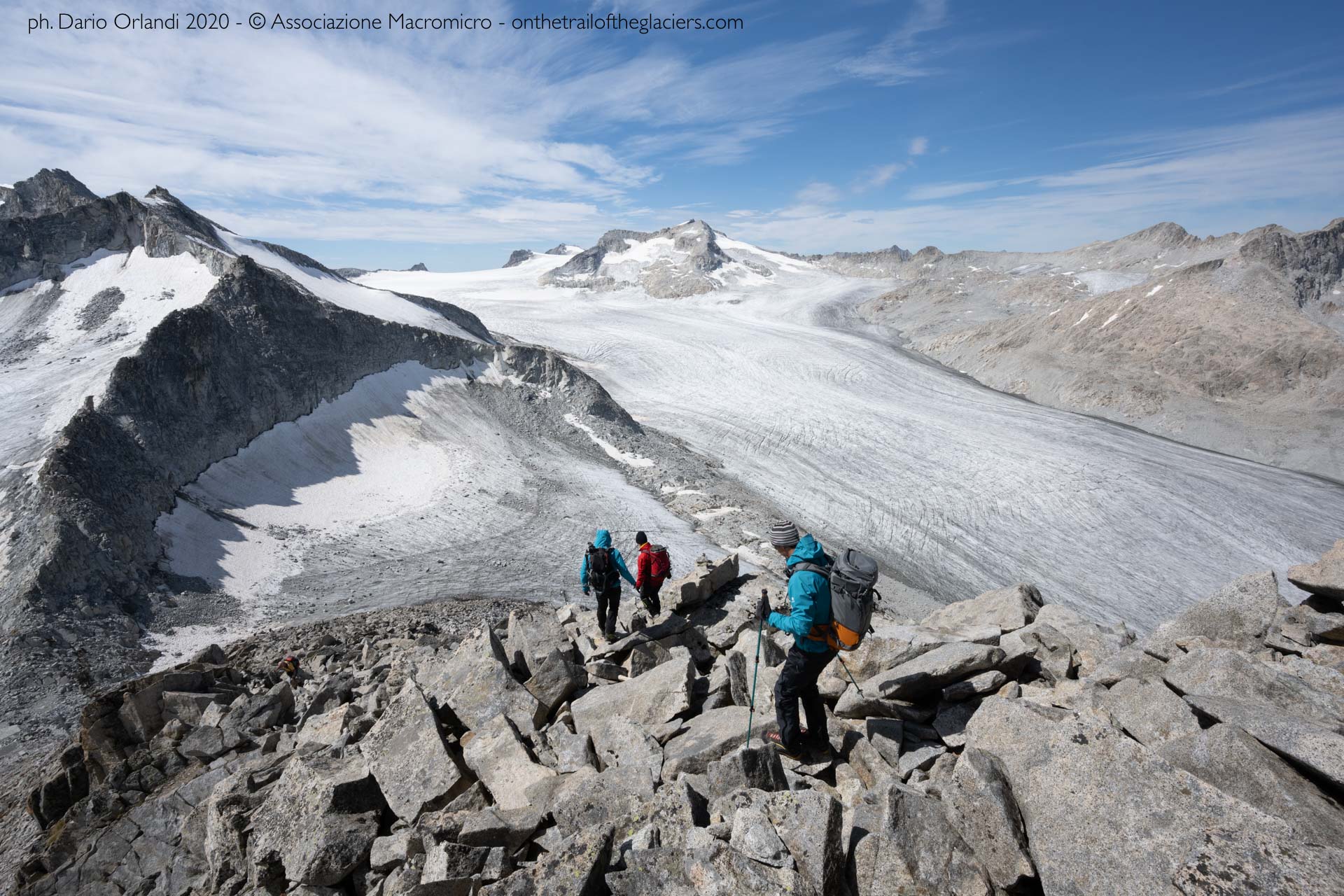 The activity on the Adamello starts from the “Mandrone, City of Trento” Refuge, which is located in a wonderful position in the middle Genoa Valley. We wake up very early, invigorated by a breath-taking landscape, to go and find some photographic points we had identified during the pre-expedition in the summer of 2019. After having looking at the historical photographs with Riccardo to definitively select the ones to be repeated in the following days, we walk towards the front of the Mandrone glacier, the terminal tongue of the wide Adamello glacial basin. Arrived near the great rocky escarpment, which only 100 years ago was completely buried by the glacier, we begin to look for the point from which an unknown Austrian photographer, back in 1897, had taken the image that we will repeat today.

After this first historical photograph, a little further on, we find another viewpoint from which to retake a second image. The scenery is impressive: instead of the glacial tongue there is now a barren rocky cliff and a fluvio-glacial plateau. Once on the front of the glacier, Riccardo verifies the correct functioning of the time-lapse camera installed by the Lombardy Glaciological Service and downloads the images used to study the dynamics of the glacier and for popular activities. After this work, we cross and climb up the glacier until we reach the “Caduti dell’Adamello” refuge, where we will stay overnight.

Today, at 7 a.m. we are already on our way to reach the summit of Lobbia Alta at almost 3,200 metres above sea level. It is cold, there is a lot of wind, but we are positive and determined. From the summit, in fact, we want to retake the very important and splendid panoramic view wisely realized by Vittorio Sella in 1891 by overlapping three large 20×25 cm slabs. After waiting for the right time to replicate the panorama with the same shadows of the historical photograph, I am finally ready to shoot my sequence. In order to represent the current position of the Lobbia and Mandrone glacier fronts, I decide to shoot two more plates, one at the beginning and one at the end of the sequence. After five hours on the summit to repeat two more historical photographs and shoot the documentary, we are ready to descend to the valley. On the “Pian di Neve” we have an appointment with Roberto Ambrosini, biologist of the State University of Milan, who is carrying out some surveys to better understand the evolution of the glacier and to verify in laboratory the level of contamination by micro plastics, materials that now are everywhere on our planet.

This morning we repeated some historical photographs of the Lobbia and Mandrone glaciers by the Austrian publisher Stenger & Co, found at the Historical Archive of Trento. Then, after having closed the heavy backpacks and loaded them on the Mandrone refuge’s cableway, we quickly descended to the valley in the steep and magnificent Genova Valley, immersed in a forest of centuries-old fir trees.

These days, bad weather conditions are expected and in the transfer to the Dolomites, we will stop for a few days in Trento to process and archive the materials produced during the previous expeditions. We take the opportunity to visit our friend Cristian Casarotto, cultural mediator of the MUSE of Trento, who with great passion and competence accompanied us on a rich visit to one of the most beautiful natural science museums in Italy.

The next day, before moving towards Marmolada, also known as the “Queen of the Dolomites”, we visit our friend and colleague Kurt Moser with his wife Barbara at their atelier in Caldaro (Bolzano). His technique of garrotyping on a very large size (unique slabs in 90×60 cm size) is fascinating as well as extremely complicated: it requires meticulous preparation, attention and precision, but the result, which allows us to relive the charm of a handmade technique and leads to the production of unique pieces, repays all the effort.

At last, we have reached the beautiful Dolomites, UNESCO World Heritage Site in 2009 for their environmental, landscape and naturalistic characteristics. Near the Fedaia Pass, under the Marmolada, we start to make the first inspections to understand which historical images to take and what places we have to reach. In fact, some of the points, from which the historical photos can be taken, are still not completely clear.  The scenery is as compelling as – on second thought – desolating: the Marmolada glacier is one of the first destined to disappear due to global warming. Researchers’ data show a decrease in the ice thickness, which at the front decreased from 2 to 4 metres per year, with a retreat by up to 30 metres.

On the 1st of September, we go up the opposite side of the Marmolada to look for the ancient point from which the Trentino photographer Franz Dandone photographed the glacier back in 1880. Dandone’s image represents a glacier in very different conditions from those of today, with an impressive reduction in glacial mass, thickness and extension. We find the photographic point without too much effort by climbing steep grassy slopes and, as always, trying to identifying ourselves with the choices of the photographer. In order to repeat the historical framing, we are forced to wait for the clouds to release the peculiar summit crests of the famous Marmolada profile, the great difference in light between the snowy peaks and the valley bottom forces me to use a neutral degrading filter to compensate for the exposure.  After the shot, we allow ourselves a moment of rest and I take the opportunity to describe our work to the journalist and photographer Jacopo Pasotti, who is accompanying us in these days to make a reportage on the expedition for the German Deutsche Welle.

The day after, we climb up towards the Padon Pass to reach the Mesolina peak, a hill from which we can enjoy an extraordinary 360-degree view of Trentino, South Tyrolean and Veneto Dolomites, where another important panoramic photograph of the Marmolada glacier was taken. This time we are on the trail of the “Specialist Brigade – Photographic Section” of the Military Geographic Institute, which during the Great War sent photographic teams to carry out high-resolution documentation campaigns to the Alps. The comparison between the current condition and the historical image that I have in my hand is merciless. Indeed, the glacier is completely different from that represented in the historical images of the late nineteenth and early twentieth century, when its surface area exceeded 4 km2 and formed an uninterrupted mantle that covered the entire northern side of the Marmolada, with three wide fronts. Today, not only the glacier has an extension of just a little bit more than 1 km2, but its thickness decreased by many tens of metres, while the fronts retreated by hundreds of metres.