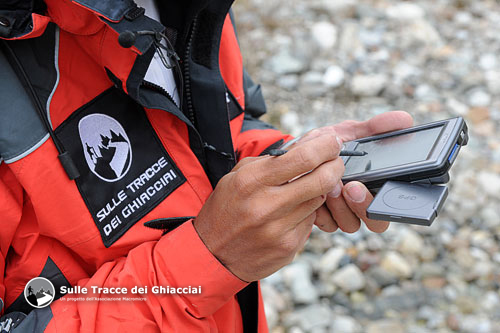 Yesterday we finished some important observations on the area of Baltoro and in particular on his forehead. The extension of the glacier, with a basin area of 60 km in length, covering a range of altitudes between about 3650 meters of his forehead up to the 8611 meters of K2, and the grandeur of its numerous tributary glaciers, make its dynamics very complex. With these assumptions, it’s possible to  guess how the variables involved are many, just by thinking about the change in distribution of precipitation (snow or rain that may respectively contribute to the accumulation or ablation of the glacier) with changes in altitude or slope, which affect both directly and indirectly, through tributary glaciers, the mass balance of the Baltoro; also, the position of these  tributaries will determine sensible oscillations in their area of influence, more or less close to the front.

If we also consider the fact that some tributary glaciers are rarely studied, and others exhibit an abnormal behavior characterized by sudden movements, thus taking the name of surging glaciers, we understand how to determine the health status of this glacier is very delicate operation. However, from the geological and geomorphological observations made in some “sensitive” areas already used in previous studies as topographic milestones, and from the photographic comparison with historical photos, available since 1909, the glacier can be divided (roughly on the basis of a preliminary analysis of field data) in three main areas:

During the last century, the glacier front can be considered stationary, in reference to the previous comments made by Dr. Pecci during the Ev-K2-CNR expedition in 1997 no changes are appreciated, but some of the geomorphological observations reveal that some areas of the forehead had a recent advancement.

In addition to the observed longitudinal variation of the front of the glacier, it remains to estimate its probable variation in height probably dynamically associated with the stages of advancement and withdrawal; but here on field, for the moment, we are forced just to determine the longitudinal variation, and define the front of the glacier as stationary.