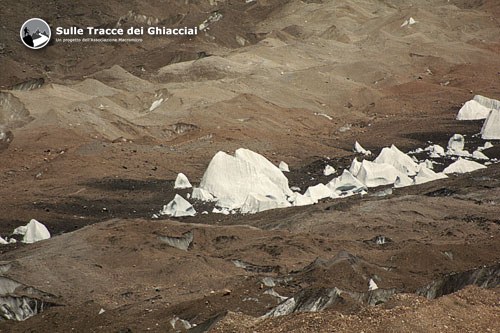 Among the extensive amount of debris and huge longitudinal moraines developing along the valley of the Baltoro, there are peculiar alignments of naked ice, shapes classified as ice sails. These are shapes whose origin is still debated in the literature. Going up the valley of the Baltoro, it was possible to appreciate the evolutive dynamics of these shapes since, moving from valley to mountain, it’s like to travel backwards in time along the “life” of these formations, from their genesis to their undoing. At the end of the glacier, in fact, these forms appear to be buried by the surrounding moraines while in the Concordia circus ice sails dominate on the surrounding debris. This phenomenon is probably related both to the differential ablation between ice covered with debris and naked ice, and to the erosion caused by the fusion waters.

The suggested dynamics may be summarized as follows: in the genesis area of the sails, the detrital cover of the surrounding areas is a few centimeters tick, and the ablation is more intense on the ice covered by debris compared to the naked ice; in this situation the sails start to stay well above than the rest of the debris, while the run-off waters coming from melting, by affecting their sides, accentuate the major characteristic triangular shape. In the distal part of the glacier, the detrital cover is so high to be able to protect the underlying ice from ablation, while the sails exposed to sunlight are more easily subject to loss of mass. With the continuing phenomenon such gradients are created, between sails and debris, that would cause the slipping of debris on the sails, first by covering them partially, then to fully incorporate them within the debris covered glacier.