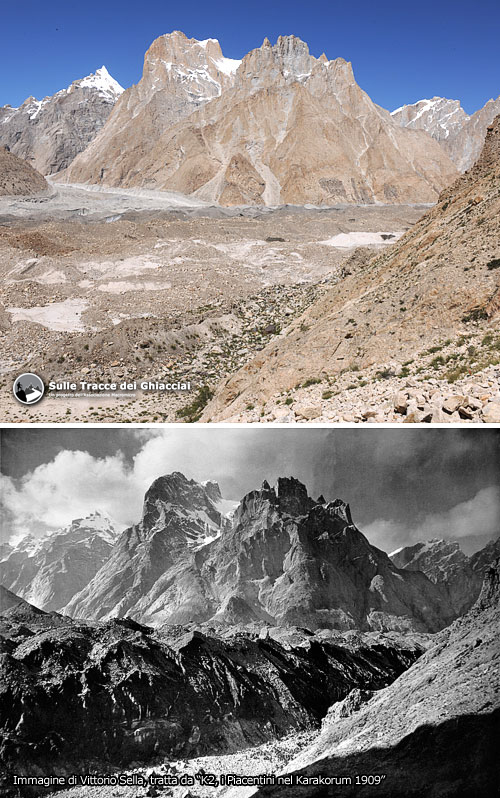 The project “On the Trails of the Glaciers” has as its main target, through several expeditions, the production of modern photographic images reproducing the exact angles of shots taken early last century by the most famous exploring photographers; these new images will give scientists and investigators the basis for comparative observations on the state of the largest glaciers in the world, valuable indicators for assessing the current climate state, and especially its evolution over time.

This very year, in occasion of the hundredth anniversary of the Duke of Abruzzi’s expedition to Karakorum, the first of the planned shipments within the project took place, allowing us to collect a substantial amount of data in the same places visited by the historic expedition 100 years away.

The idea behind the project came in recent years, with some important experiences gained through my work as a naturalist and mountaineer photographer. In the summer of 2004 I was engaged as official photographer of the alpinistic-scientific expedition commemorating the fiftieth anniversary of the first ascent of K2, the second highest mountain in the world. In preparation for this expedition I had already conducted some research with the collaboration of the Italian Geographic Society, to replicate some footage made by Massimo Terzano and Vittorio Sella; unfortunately, commitments to implement the report of the expedition, especially at high altitude, prevented me to reach the locations that I had already identified.

On the next winter (2004-2005) I produced a reportage on the glaciers of Argentinean and Chilean Patagonia, during which I became convinced of the need for spreading certain values that I consider fundamental both as part of my professional work, and in the context of environmental issues. Contextualizing the photographic activities within a multidisciplinary project, I imagined to involve glaciologists researchers to jointly address key environmental issues such as climate changes, of which the glaciers are extremely sensitive indicators, and issues related to energy conservation and sustainable management of natural resources, the water above all.

Returned from Patagonia, I started to study a possible project able to combine photographic and scientific purposes. I contacted Prof. Claudio Smiraglia, one of the world’s leading experts on glaciers, who accepted my proposal with enthusiasm for a collaboration, providing valuable insight and tips for setting up the entire project.

The following years were spent among museums, foundations, archives and libraries, to investigate the historical texts and diaries that the early explorers have left us, and to analyze the photographs and maps that would help me to idntify the exact geographical points where they got their shots. 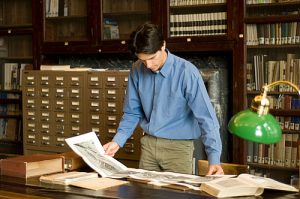 The images that gradually I included in the selection must meet two basic requirements: they must be of considerable aesthetic impact and should play a substantial scientific interest. Parallel to this research, I also wanted to trace the widest possible range of information on equipment used by early photographers, in order to plan my shots with the same magnification ratio and then decide which camera bodies and what lenses to choose for new shots. The final choice fell on the Linhof Technorama 617 S III, a camera capable of slides in the spectacular panoramic format 6×17 cm, and on the Linhof Master Technika 3000, a folding camera capable of record stunning images on plates sized up to 4×5 inches (10,5×12,7 cm). The Master Technika was used during the first expedition also to obtain panoramic mosaics, thus achieving long horizontal scans at very high resolution, as both Sella and Terzano did in the past. 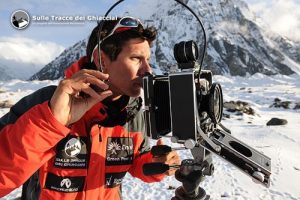 The decision to take all the shootings on traditional film was almost mandatory, for several technical reasons: first, the need to achieve the same magnification ratio obtained by the historical authors; secondly, the desire to push the shooting quality to the instrumental limits today available, with the possibility of obtaining ultra-high-resolution images, impossible to achieve even with the best digital SLR cameras currently available: from a 4,000 dpi scan of a 4×5-inch photographic plate, a 16,000×20,000 pixels bitmap image is produced (a total amount of 320 million pixels for each image!). During the expedition were collected panoramic mosaic images composed of up to seven plates, which once merged generate a single image almost 80,000 pixels long: such resolutions allow to obtain prints with no interpolation over twelve meters long!

In order to locate the points of shooting several methods were adopted. The use of historical photographic prints directly on the ground was of crucial help to analyze the landscape. 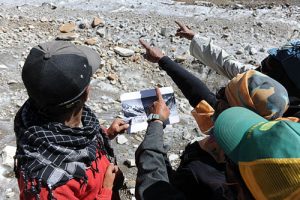 Of great importance were also the comparisons between the historical maps, kindly supplied by the italian Military Geographic Institute, and modern ones, which gave us great ideas for the identification of different locations.

Finally, we have always had with us GIS data, with a three-dimensional model of the area of the Karakoram (DEM, Digital Elevation Model) for the analysis and preview of the points of shooting before reaching them physically. All this was accompanied by a careful reading of the tales of early photographers and explorers, who through their travel diaries have given us very useful suggestions and detailed descriptions of their experience.

In the gallery that accompanies these notes we present a selection of comparison images that we collected during this year’s expedition, and a collection of backstage images collected during on-field activities and during our preliminary studies in Italy.

We do really hope that this overview will stimulate a renewed enthusiasm towards the thematics we face, we leave you with an appointment for the forthcoming months, with new activities planned under the project “On the Trails of the Glaciers”, including a photo exhibition and a video documentary.