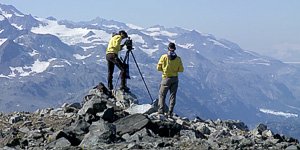 The expedition “On the Trail of the Glaciers – Alaska 2013” comes to an end. Five intense weeks of moving, long missions in the dense rainforest, icy mornings on small boats to reach the heart of one of the most spectacular integral reserves in the world. Glacier Bay National Park, a magical fjord, still in 1750 completely buried by an ice cap and now, following the most intense glacial retreat of the entire planet, home to an incredible number of animal species. Bears, whales, seals, killer whales, sea lions have accompanied the missions to repeat the photos taken at the end of the 800 by explorers, naturalists and American geologists to discover Alaska. #

Below we present a brief assembly of the most beautiful video images of the expedition: