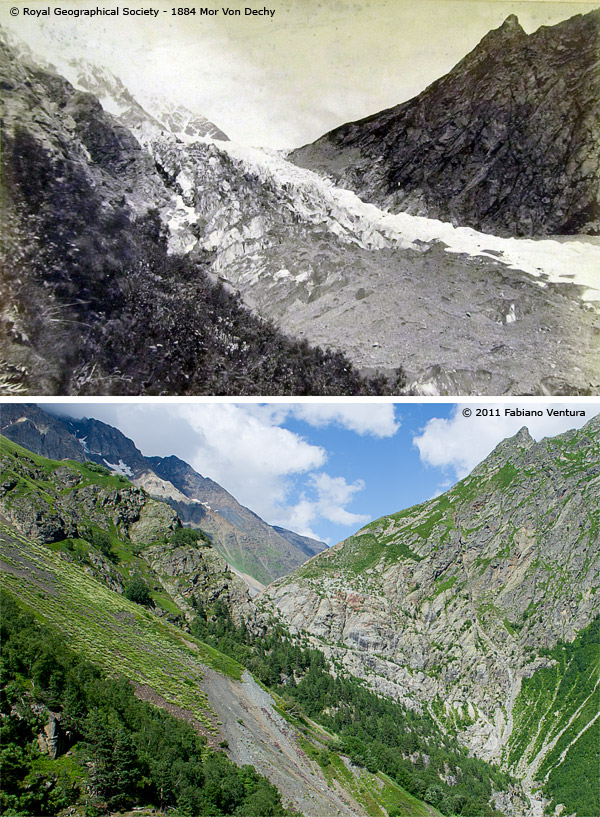 Saturday, Aug 6th, 6am. We are finally leaving for our second mission on the Svanetia glaciers, the unexplored land that spreads in the Georgian northwest. This region is surrounded by some of the highest mountain in Caucaso, with peaks never below3000 meters, often higher than5000 meters, like the Skhara’ mountain with its 5201 meters.

Riccardo, Kenneth, George (our guide) and Merab (our translator), along with six porters arrived with us to Zhabeshi village, moved towards Tviberi valley, directed to it glacier. The aim of the scientific mission, as mentioned in the previous article, consist in measuring the melting rate of the glacier thanks to the positioning of eight ablation stakes on glaciers zones with different characteristics. Specifically, the thickness of the floating debris over the glacier will be related to the glacier melting and with the “reflecting ratio” (albedo) of the interface, which will be accurately measured on each spot. Geomorphologycal observations will be acquired during the long way to the glacier in order to reconstruct it’s length and volume.

Me, Marco and Luca, along with the porters Rezo and Mamuca, are moving to a closer valley, to reach during the day the Tszaneri glacier and find out some photographic spot used to take pictures by Mor Von Deshy in 1884.

The landscape is dominated by deep woody valley, which separate the surrounding high peaks, and very much reminds the Alpine valley of the end of ‘800: the men presence limited to small villages, the well preserved and unique middle-age towers, and a general atmosphere that seems frozen in time.

Right away the mountains reveal their wild nature, with the thin traces of the trail we are following to climb the valley, which soon get lost into the vegetation. Huge secular firs, thick birches twisted by the avalanche, and flowers higher than two meters surround us and make it very difficult to orient ourselves. It is only after we devided several times to find the better rout between the rock walls that we reach the first photographic spot.

In order to have a wide point of view to shoot, I decided to climb for about15 meterson a big fir, with the D3s Nikon for a first shooting. I repeat the shot right away with the big format Linhof. I leave to your imagination the difficulties to realize a shot with a folding camera, finding the balance on the branches tree at15 metershight…….

I decide to reach the other spots by myself. Motivation helps me to collect the last energy while the others look at me from a pointy rock where they decided to stop. I surpass a thick forest and a debris canal; I climb about200 metersalong a steep slope and I can then reach a good view on the Kazebi glacier. Unfortunately, to find the exact point of the historical photograph I should climb other100 meters, but it is too late, and I don’t want to risk that get dark. I decide to shoot the glacier anyway, towards the wonderful Tetnuldi, a dizzy peack of4858 meters.

As predicted, we arrive to the village only late at night. Exhausted, we mount the tents and try to reach Riccardo via radio, but we can’t make it because of the long-distance. We therefore use the satellite phone: Riccardo is not having any trouble with his plan, but he cannot send us the porter who should have helped us the next day. The porter will in fact stay with them to help them reaching the still far glacier terminus.

The following day, since we have to get a new porter and a horse for our equipment, we cannot leave as early as we wanted. Marco e Luca will have to meet during the day the first group on the Tviberi Glacier and sleep there in the tent for a few days, while we will try to find the photographic spots.

Once we renter into the valley we can restablish a radio-contact with Riccardo, who inform us on his position; from the first measurements, the glacier terminus resulted much more regressed than what is described on the modern topographic maps. Therefore they must keep walking for additional two hours.

I decide to stop where, 127 years ago resided the terminus glacier, to re-take some hystorical shooting. Marco and Luca keep walking towards the actual glacier terminus. Here as well, the landscape changes and the thick vegetation that back then was completely absent, give me a lot of trouble to find the correct shooting point.

On the way back to the village I can also find the exact location of a wonderful photo of Vittorio Sella, that I show on the gallery along with the other images.

4 thoughts on “Second mission on the glaciers”