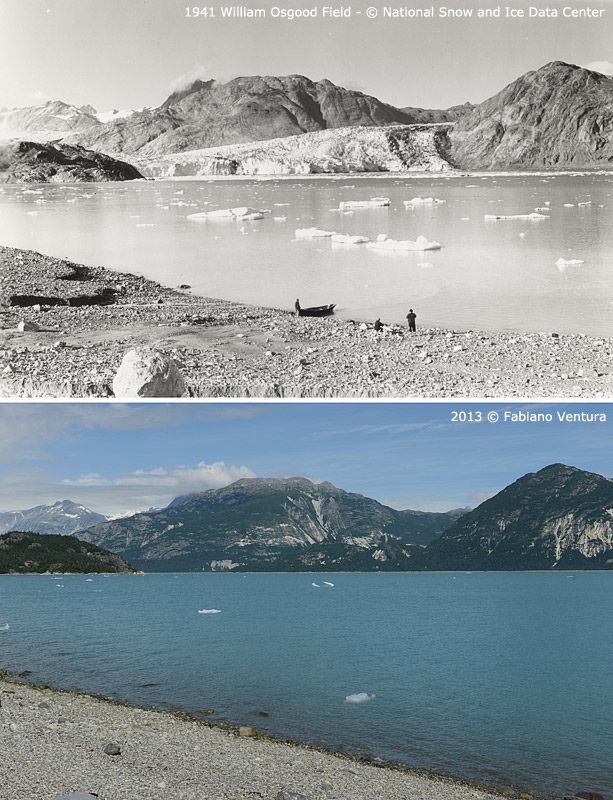 Our captain has yet to repair his boat’s engine, but a beautiful day is awaiting us and we do not want to waste it. Jim, the man who had brought us here a few days earlier, agrees to accompanying us and so we decide to set off on a mission to the Eastern peninsula of the Park’s Bay. The day’s objective is to re-take some photos of the terminus of the Muir Glacier, taken in 1891 and then in 1941. Travelling at 40 miles an hour we reach Wolf Point beach in two and a half hours.  After scouting the area to find the exact points of the mountain view in the historic photograph, we decide on a place. Just as we are getting off the boat Jim, holding his binoculars, screams at us to get back on for he has spotted a mother grizzly bear with three cubs approaching.

We are against the wind so luckily the bears haven’t smelt us and they walk right past between the beach and the vegetation. Arriving at our boat the mother bear hears a sound which heightens her suspicion so she calls her cubs to follow her. It is an amazing sight, even Jim says he has never seen a grizzly mum with her cubs up close like this and cries out, “unbelievable, only in Alaska…!”.

We are soon back on land looking for the exact point that William Osgood Field, in 1914, took his photo of the terminus of the Muir Glacier. The vegetation around does not allow us to take the photo precisely from the same historic spot, but the angle is the same.

Back on the boat, we head towards the terminus of the McBride Glacier.

The passage way into the Bay is very narrow with a strong current due to tidal heights varying over six meters. The only way to get through is by advancing slalom style between enormous icebergs that are moving quickly towards the edge of the passage way. Once we enter the Bay we are welcomed with the sight of many seals sunning themselves on flat icebergs and a large colony of Kittiwake sea gulls.

The ice front of the Glacier is impressive: it is nearly one kilometer in width, about 50 meters high and the katabatic breeze is strong.  Upon leaving the bay, we head towards Muir Point, where we hope to re-create the photo taken by Harry Fielding Reid in 1891.  We get there after about an hour and a half boat-ride along the coast, greeted by two sea eagles soaring above looking to take refuge in the forest. We check carefully for any bears in the area and choose a river-ridge to simulate the height of the Glacier from which Harry Fielding Ried took his photograph, over 120 years ago. We take the photo with the same frame and are happy to head out after such a tiring day. Our trip back is filled with the usual sight of killer whales, whales and sea lions.