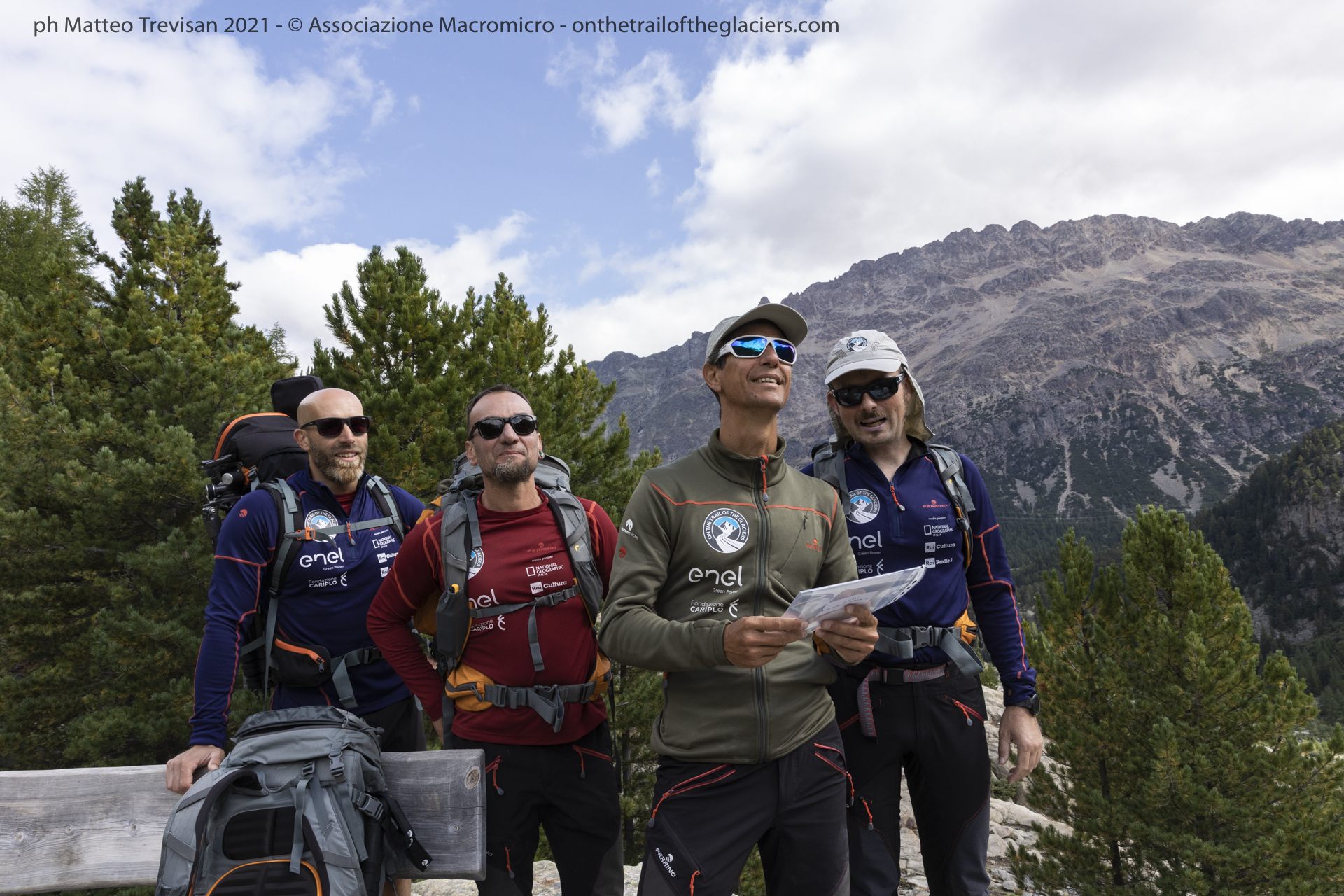 Today our target is the Rhone Glacier, which we will meet on our way from Valais to Engadine. We have with us some shots of mid-19th century that show the valley, from which the roads to the Furka and Grimsel passes start, completely invaded by the glacier front, at that time fed by the enormous icefall. Right at the bottom of the valley, then reached by the glacier front, a hotel was built at the end of the 19th century to allow tourists to comfortably visit it.

In the morning, we manage to find the locations of the most important historical shots and then we search for the points of the shots, where, in the original photos, there were also hotels, carriages or cars of the early 20th century.

In the evening, we move to Pontresina in Engadine where we meet Riccardo Scotti, geologist of the Glaciological Service of Lombardy, again with Matteo Trevisan and Anna Gusmeroli to start the work in the Bernina area.

Soon the next day we are on the field to photograph the Morteratsch glacier, first from the bottom of the valley and then in the morning from a promontory just above the point where the glacier arrived at the end of the 19th century. We manage to find the same historical shots, but as it often happens, the view of the glacier is obstructed by the presence of many trees and in this case also by several electric train lines that of course were not there once. I am therefore forced to climb dangerously on the trees, sometimes even for several meters, to be able to free the view on the valley that was then completely invaded by the front of the glacier. In this case, it is almost impossible to see the glacier from the bottom of the valley, due to the frontal retreat of more than 2 km from its maximum expansion at the peak of the Little Ice Age; today its front is behind rocky bastions that cover the view from below.

The weather allows us to plan the work in the valley Rosg, from which to repeat the shots of Alfredo Corti, one of the most active photographers of Valtellina in the early 20th century.

The next day we decide to go to the Bernina Pass to look for some shooting locations that portray the Cambrena glacier. We selected six pictures, one of which is particularly old, dating back to 1867, to which I want to devote myself as a priority, also in consideration of the atmospheric instability that could get worse from one moment to the next. In the course of the day we meet some elderly local hikers, who, intrigued by our work, tell us about the situation of the glacier 40 years ago and the changes they have witnessed in recent decades.

Thursday the 26th of August, we set off very early to take the first cable car to Corvatsch near St. Moritz, which takes us close to the Fuorcla Surlejla Restaurant and then down into the wonderful and wild Roseg Valley. After a first photographic comparison right from the refreshment point, which highlights the almost total disappearance of the Corvatsch glacier, we start to descend into the valley to look for a path, disused for over 100 years, the traces of which can still be seen in the satellite images we consulted when planning the itinerary. Thanks to the discovery of this ancient path, I manage to find a first place, from which to repeat a famous shot of Alfredo Corti. We are not, however, sure of the exact point, from which to repeat the photo; so we try to go a little further and Riccardo suggests a new position with a rock that. Based on the comparison with the historical image, it turns out to be exactly the one, on which Corti’s companions sat and were portrayed. The comparison between the historical image and the landscape that surrounds us is as always pitiless, the entire valley below us was full of ice in 1906, while today there is a debris chasm with a green lake and the glacier has retreated along the slopes leaving under itself rocky slopes with debris moraines. Satisfied with the photographic repetition, not at all taken for granted, we head towards the valley along the ancient path that sometimes gets lost in the tall grass. The landscape is breath-taking, the valley is uncontaminated and on the opposite side, towards the east, the enormous Bernina chain, from which the Tschierva glacier descends, our next photographic objective, rises. After about one hour or so, we reach the Margnun da L’Alp Ota huts, from which some beautiful photographs were taken at the end of the 19th century. I spend a lot of time finding the shooting points and, given the little time available, we decide to split up into three teams, each looking for a different point, from which the three photographs were taken. After more than 30 minutes of research, I succeeded in finding a first shot and then another one that included the huts. At that time, the Tschierva glacier reached as far as the Roseg valley, but today it has left its two large moraines bare and detrital and has perched along steep slopes.

Having repeated these two shots, Riccardo remains with Matteo to make some timelapse with the Syrp remotely controlled head; the thunder, however, spurs us to go down quickly and we rapidly walk down the long road to the car parked at the bottom of the valley.

The last day in the Engadine area, we have an appointment on the Morteratsch glacier with the glaciologists Claudio Smiraglia, Guglielmina Diolaiuti and Davide Fugazza from the University of Milan, who joined us to make some surveys and photogrammetric drone shots. Federico and Matteo go to the appointment to document their work with videos and photographs, while Riccardo and I go up to Diavolezza to repeat some photographs of the Vadret da Pesrs, ancient accumulation basin flowing into the Morteratsch glacier just downstream of the magnificent northern spurs of Pizzi Palù. Unfortunately, once we arrived at the refuge with the cableway at over 3,000 meters, the clouds covered all the peaks, while in the historical photographs that I would like to repeat were portrayed on a clear and cloudless day. We wait outside the refuge for the whole morning to take some timelapses, but the clouds begin to clear only after 12 p.m.. After repeating the four historical photographs, I quickly take the coordinates with the GPS of each shooting location and mark them behind the old prints and we quickly descend to the valley to reach the researchers at the front of the Morteratsch glacier to follow them in their surveys.

Meeting the researchers is always exciting, they tell us about their experiences in the field and make us understand the complex dynamics of these huge rivers of ice and the consequences of their progressive retreat.