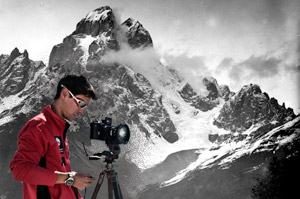 The second expedition of the project on the “On the Trail of the Glaciers”, heading to the Georgian Caucaso, is ready to start on July 28th.

The expedition’ team, composed of expert alpinists, researchers and photographers, will take compartive pictures and make glaciological measurements. Again, a specialized tv troupe will follow the project to make a high-definition documentary describing the activities of the expedition.
The expedition’s team is composed by great names: the photographer and president of “Macromicro” Fabiano Ventura, the glaciologists Kenneth Hewitt and Riccardo Scotti, the director Marco Preti and the cameramen Luca Venchiarutti.

Dr. Stefano Urbini of the National Institute of Geophisics and Vulcanology of Rome has further joined the Scientific Committee, which was already composed of prestigious academics like Prof. Claudio Smiraglia, Prof. Kenneth Hewitt, and Dr Cristoph Mayer.

“Our purpose- explains Fabiano Ventura, photographer and project inventor- is to shoot same photos that the ancient explorers took at the end of  Eighteen- beginning of the Nineteenth Century in order to compare them with our new pictures taken from the same geographical points. This will help to study and show the climate changes happening on Earth. During the expedition the glaciers’ experts collect different sets of data that, associated with the comparative pictures, will give us results about the climatic changes associated to the glaciers. In summary, we would like to sensitize the public opinion on these important themes”.

Many glaciers are disappearing (within 2050, 88% of glaciers is at risk of extinction), but from the results obtained from the 1st expedition, we can say that most Karakorum glaciers are stable and some of them seem to actually increase. The data collected from the Caucasian expedition and the activities of the team can be followed at the website  www.macromicro.it that will be taken up-to-date in real time by the same experts during the entire time of the expedition.