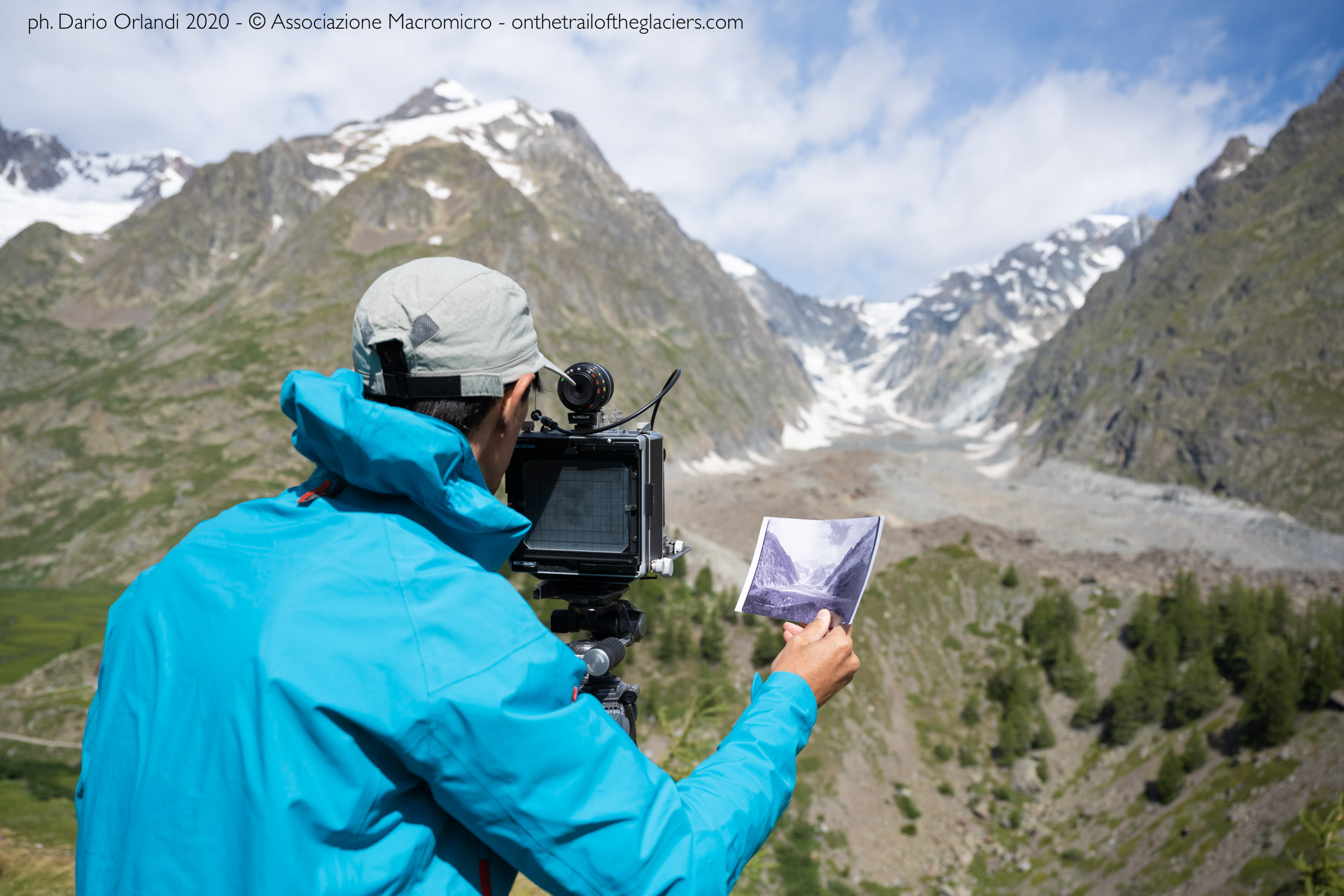 First stop in Milan to meet all the researchers of the State University, then in Turin where, at the National Mountain Museum, the exhibition “On the trail of the glaciers” is in progress (until August 30).  From this place, which is the historical seat of the Italian Alpine Club, we organize a symbolic departure to reach Courmayeur, in Valle d’Aosta, where the expedition has entered into full swing.

At 8:30 a.m. wWe go up to the Elena refuge where we meet Philip Deline, geomorphologist of the Savoy University of Mont Blanc, one of the most experienced in the area and a great fan of the project, who will accompany us during our ascents in the following days. The aim of the first mission is to repeat Jules Brocherel’s historical shot of the Pré de Bar glacier in 1920. About 200 meters above the refuge, we enjoy a wonderful view of the Pré de Bar glacier, or rather what remains of it. It was here that the nature photographer, exactly 100 years ago, chose his shooting point. Last year, during the pre-expedition stage, I had already repeated the historical photograph, but it was only during the editing phase that I realized that I had not found the exact shooting point. So this year I came back to find the exact original perspective.

The objective of the day is the Miage glacier. Over 10 kilometres long, it is one of the most impressive and extensive black glaciers in the Alps. The lower part of the glacier is completely covered by rocky debris which partly protects it from solar radiation and therefore from melting.

In this case, I selected some photographs on a 13×18 cm plate by Jules Brocherel, perfectly preserved thanks to the important archiving work of the Brell fund of the Valle D’Aosta Region. The climb to find the historical photographic points is not tiring: in fact, I preferred to select photographs that have a very angled point of view on the glacier to highlight the loss of its thickness compared to the lateral moraines that have remained almost completely unchanged over the years.

From the comparisons we could see how the glacier has now collapsed compared to its moraines. Also the glaciologist Davide Fugazza (from the University of Milan) has confirmed that, in the last decades, the glacier has significantly slowed down its flow speed, a clear sign of mass reduction in the accumulation zone.

A further confirmation came from the repetition of another historical Brocherel’s image of the Miage lake glacial cliff: the position of the shot shows a significant reduction of the glacier thickness in the frontal area.

On the third day, we are still in Val Veny where, together with Philip, we reach the valley above the Elisabetta refuge by car, strictly in electric mode to minimize our impact on the environment and in order not to disturb the peace of the valley.

This allowed us to reach a small plateau in only three hundred meters of altitude difference, from which I can repeat an important photograph of the Agostino Ferrari’collection (director of the CAI magazine between the end of ‘800 and the beginning of ‘900) of the Lex Blanche glacier that at the end of ‘800 went down to Val Veny. Today the glacier has retreated by more than a kilometre, leaving some rounded rock plaques and a landscape undoubtedly less fascinating than what it appeared to our predecessors’ eyes.

Today is a special day. For many years, I had promised my daughters, Miriam and Lara, that I would involve them in the “Alps 2020” expedition. And so it was.

Before starting the hike we looked together at the topographic map of the area and the pictures to repeat; we made assumptions about possible places to reach and the most suitable times. Two young explorer photographers! I must admit that it almost moved me to tears the fact that they were so passionate in planning the excursion with me.

Having started the ascent towards the sources of the Lys, along the beautiful Gressoney valley on the slopes of Monte Rosa, I asked my daughters to guide us to try to find the photographic point from which the pictures were taken over 120 years ago. Also for the girls it was a great emotion, a real adventure; a sort of great “treasure hunt” that until today they had always experienced only through my storytelling.

The identification of the first place was a real discovery: coming out of a larch wood and passing a small bump, the girls sighted the lodge depicted in the historical photo, which was identical to that time. As soon as they saw it, they ran screaming “It is precisely that!”, noting that everything had remained the same: the windows, the stairs, the rock next to the house… But when they stopped they said: “Dad, that’s the point, we’re sure! It’s all the same, everything fits. But there are many more trees and the glacier is completely gone.” In fact, in the valley, where 120 years ago the front of the Lys Glacier reached the valley, a dense forest of larch trees has grown.

The day went on like this, chasing the time to reach the place of the shot at the same time it was taken. “Dad, come here! No it’s higher! No we have to go down, it’s too high up here! But the ridges don’t match!” I can’t hide the emotion I felt living their enthusiasm to finally be able to join me in a stage of the project that has accompanied our lives since their early childhood.

During the long day, we were able to repeat three photographs of the Lys glacier by Jules Brocherel, Vittorio Sella and Umberto Monterin. What will remain etched forever in my memory is the memory of a day of sharing with my daughters, a sort of handover between two generations symbolically united to witness the effects of climate change.

This morning we left well refreshed by the exquisite welcome of our friends Janine and Giorgio, owners and managers of the Chalet du Lys. The day was very long but less tiring than in the past, having been able to use the cable cars up to the Passo dei Salati to reach the Corno del Camoscio at 3026 meters. From this summit I repeated a photograph of Vittorio Sella of the Bors and Indren glaciers, taken in September 1892. Despite the presence of extensive snow, typical of the month of July, the volumetric reduction of the glaciers is particularly evident.

Just below the Corno del Camoscio, we reach the Istituto Mosso, where Umberto Monterin, one of the pioneers of alpine climatology, developed his first studies at high altitude. Near the building, I repeated a historical image of A. G. Wehrli.

By mid-morning, we reached the researchers of the Department of Environmental, Territory and Infrastructure Engineering(DIATI) of the Polytechnic of Turin. With them we started an important collaboration for the realization of three-dimensional models of the glaciers, through photogrammetric techniques, to be used for scientific studies and dissemination activities.

Even today, we left Staffal very early. We took the cableway up to Colle Bettaforca. We looked out towards the Val d’Ayas and found the shortest route to the summit of the Palon de Resy, from where we assumed that Umberto Monterin, in 1920, and some photographers of the Military Geographic Institute, in 1934, took two photographs particularly useful for a comparison with the current state of the Verra glacier. For both photographs, as for all the photographs selected for the expedition, I am certain that I can use the original negatives on a glass plate, so that I can make a high-resolution reproduction.

Arriving just a few meters from the summit, suddenly revealed a wonderful view of the glacier, whose moraines, a remnant of the glacier expansion during the Small Ice Age, are in my opinion among the most beautiful and elegant of all the Alps. After verifying the perspective of the historical photographs, I decided to place my Gitzo tripod exactly under the cross marking the summit and from here I took the photographs for the comparison. The glacier was already significantly backward between 1920 and 1934, but the retreat highlighted by the comparison between the two historical images has nothing to do with the reduction in recent decades.

One thought on “Valle D’Aosta: the adventure of Alpi 2020 begins”