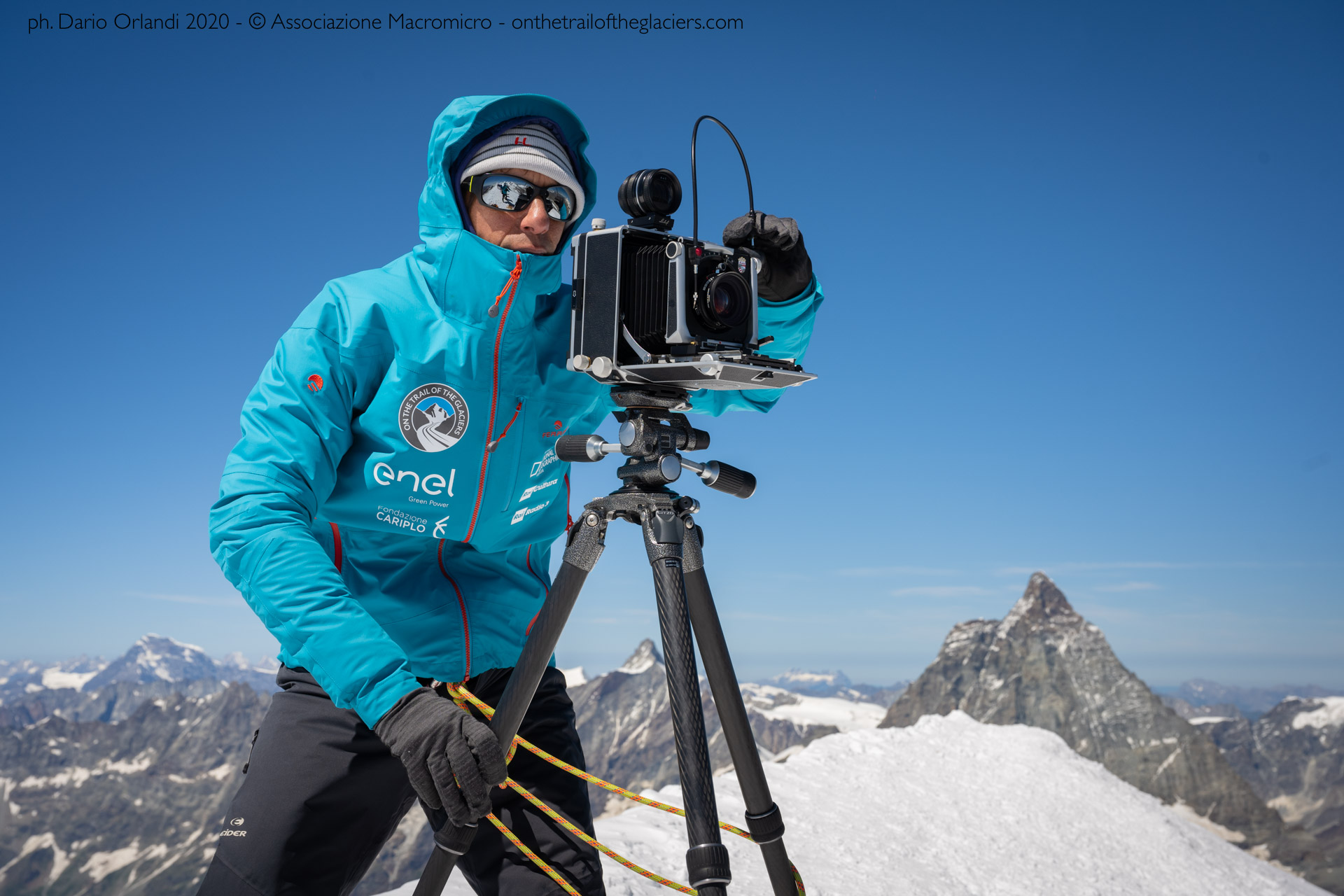 Valnontey is a wonderful hollow north of the Gran Paradiso. Here, in the early morning, after having loaded the necessary equipment in our backpacks, we dive into the larch woods that populate the valley bottom still in the shade, with the glaciers that can be seen perched in the distance above the amphitheatre of large cliffs already illuminated by the sun. After a few minutes’ walk, we leave the bottom of the valley to take a path on the hydrographic right of the valley and climb a steep slope that leads us to Alpe Money, a mountain pasture located on a small plateau with a magnificent view of the valley.

Along the path we find the point from which Mario Gabinio, in 1903, had taken a panoramic photograph of Valnontey, with a wide view of the Money, Grand Croux and Tribolazione glaciers; I immediately realize that today I will certainly make a comparison of great aesthetic and scientific value.

When I arrived at the mountain pastures, it took me almost two hours to identify the exact position from which a photograph of Agostino Ferrari’s collection, archived at the Sella Foundation, were taken. Often the combination of lenses and formats of which I found no information and the presence of objects in the foreground make it very difficult to reconstruct the original perspective. My head gets wet, it’s very hot, and I move about twenty metres into the position of a shot by Jules Brocherel from 1920, who always frames the mountain pastures of Money with the Tribolazione glacier and Grand Croux in the background.

I wait for Riccardo, who is finishing to take a gigapixel image with the panoramic head, we refresh ourselves with a few bars and some bread and cheese and we quickly walk towards the valley.

The temperatures, even though we were at 2,300 meters, were extraordinarily high, almost unbearable during the central hours of the day; this too is a clear sign of the climate changes taking place.

The bad weather forces us to stay in the valley for a couple of days, but not in vain: we have all the photographic material and videos to download and process. I also have to write this journal that I always try to do in the heat of the moment, once down in the valley, in order not to lose the living memory and emotions of the day.

Today, early in the morning, Daniele Cat Berro, researcher of the Italian Meteorological Society and one of the most experienced climatologists of the Western Alps, joined us in Cogne. The objective of the day is to reach the Herbetet mountain pastures, from where to repeat some photographs by Vittorio Sella and Emilio Gallo from 1894. Despite the greater difference in altitude compared to the previous ascent, today the sky is veiled by providential clouds that make the ascent less tiring, sheltering us from the sun.

In the lower valley, at about 2,000 metres above sea level, we find an engraving from 1866, carved by Abbot Jean Pierre Carrel and the Genoese explorer Enrico D’Albertis, which indicates that access to the glacier was much lower than it is currently: it was carved in 1866.

Just above 2,400 meters we reach the mountain pasture and start looking for the elegant perspective of the photograph, in which Sella had framed the front of the Money glacier between the two small houses of the Herbetet. While we wait for the exact time to have the shadows in the same position as the historical photograph, Daniele tells us about the important work of the Italian Meteorological Society for the study of climate and exposes his concerns about the effects of climate change on Alpine glaciers, also with regard to the consequences on human activities.

After repeating the historical photograph, we quickly disassemble the equipment and go down along the path of a few hundred meters in search of a view from which Vittorio Sella and Emilio Gallo had taken two more images of the Money glacier.

Starting from 1881,Vittorio Sella reached the top of the main Alpine peaks to take panoramic photographs, obtained by combining single plates taken in the 30×40 or 20×25 cm format. Heroic deeds, to say the least, considering the heavy and cumbersome photographic equipment of the time and the ascent routes, often of mountaineering kind.

Today, 138 years later and with excellent teamwork, we have managed to repeat its famous panoramic view from the Breithorn peak (4,164 meters) towards the Matterhorn, consisting of 8 slabs, side by side.

We climbed with lifts from Cervinia up to the 3,400 metres of the Plateau Rosa and we tied up in a ropeway to cross the glacier. The difference in height is not particularly significant, just over 700 metres, but considering the altitude and the backpacks loaded with equipment, it turns out to be a less simple obstacle than expected.

What is, however, really complicated is the realization of panoramic photography from the summit: this type of images, if we consider the choice that distinguishes the project “On the trail of the glaciers” to use large format cameras to replicate the same characteristics of historical photographs, requires special procedures and attention, especially in a high altitude environment. Indeed, to be on a summit of over 4,000 meters with little space around it and the wind blowing from the north, the need to stabilize the tripod on the precarious snow on the ridge, to change the plate with every shot and to calculate the angle of rotation of the tripod in relation to the chosen lens require lucidity and precision. Any error could compromise the entire job, the result of which you can only be sure of after developing the plates in the laboratory.

Once at the top, I positioned the solid carbon tripod, forcefully pressing the tips in the snow to stabilize it at best. Then I found the right lens to faithfully repeat the shots of the historical photos. Finally I shot two sequences, one with 8 4×5 inch plates and one using the smaller 6×9 cm format. The whole operation on the summit required more than two hours, while the cold wind started to blow. Marco helped me to keep in mind the complicated sequence of the shooting passages. Dario, besides taking the backstage pictures, mediated with diplomacy the passage on the summit of the mountaineers, who would be inexorably appear in the final picture. Riccardo helped Federico in the realization of the video shootings, which were also particularly complicated because of the wind and the sleet on the crest.

I must confess that it was a real emotion for me to see the commitment and determination of the whole team, united by the awareness of collaborating in the realization of such an important image for the documentation of the effects of climate change.

2 thoughts on “Valle d’Aosta: the repetition of Vittorio Sella’s shots from Valnontey and Breithorn”