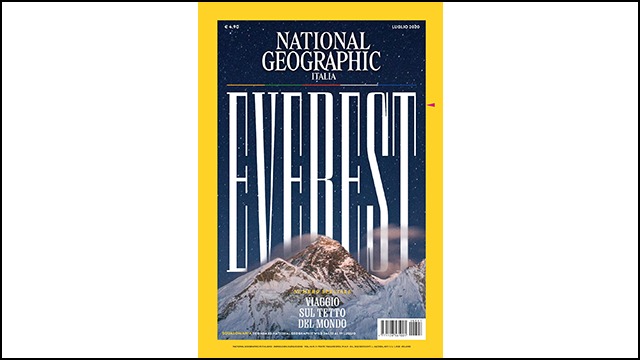 From today, on Italian newsstands, the National Geographic issue of July exclusively dedicated to the mount Everest. Four pages are dedicated to the project On the Trail of the Glaciers on it.

The article, written by Fabiano Ventura and accompanied by some photographic comparisons of the same author, tells the story of the expedition “Himalayas 2018” that took place in the eastern regions of Nepal, north of Mount Kangchenjunga and in the Tibetan regions north of Mount Everest and Cho Oyu. The article reports not only the experience of the journey and the excitement in finding the points from which the ancient photographers took their legendary images, told in first person, but also the scientific results produced. The latter, published by Nimbus at the end of 2019 in a scientific article signed by the whole group of researchers, who participated in the project, analyse the evolution of these great glaciers over the last 100 years and the forecasts of their evolution for the future.

“The publication on the prestigious magazine is gratifying for the entire Macromicro Association“, says Fabiano Ventura, director of the project On the Trail of the Glaciers.  “A further confirmation and recognition of the thickness of our work, unique in its kind, and of its historical, photographic and scientific value.”