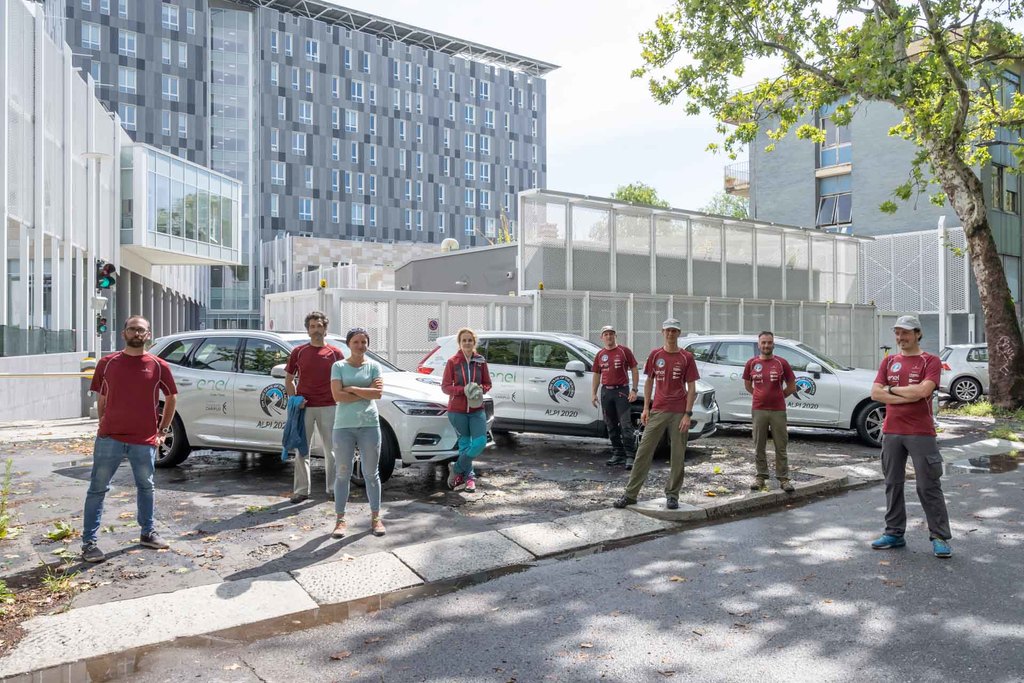 We’re off! At dawn this morning the protagonists of the Alps 2020 expedition set off from different regions of Italy and met in Milan to officially start this year adventure.

Beside Fabiano Ventura there are Federico Santini (filmmaker), Dario Orlandi (photographer and communications manager), Riccardo Scotti (glaciologist of the Lombardy Glaciological Service), Marco Manni (logistics manager) and the team of the State University of Milan: Guglielmina Diolaiuti, Roberto Ambrosini, Davide Fugazza and Roberto Azzoni. This is the team that will travel the Alpine regionfrom west to east. They will meet, from time to time, other protagonists and participate in events organized on the variousterritories.

The researchers that the team will meet during the route are from the State University of Milan(Department of Environmental Sciences and Policies), DIATI(Department of Environmental, Territorial and Infrastructural Engineering) of the Polytechnic University of Turin, SGL (Lombardy Glaciological Service) and CGI (Italian Glaciological Committee), the oldest institution for the collection and analysis of data on glacial massvariations.

The eventswill start tonight inTurin, where at 6.30 p.m. the group will stop at the MuseoMontagna, the historical seat of the Italian Alpine Club, to present the expedition to the audienceand leave immediately afterwards to Courmayeur. There, in the following days the work will start with the ascents to the glaciers of Pré de Bard, Miage and Brenva on the Mont Blanc and the Lys glacier on the Monte Rosa.

The team will bewelcomed bythe director of MuseoMontagna,Daniela Berta and Anna Ferrino, CEO of Ferrino, the latter is a supporter of the expedition and sponsor of the exhibition “On the Trail of the Glaciers”, which can be visited at MuseoMontagna until August 30th.

The event will be availablein livestreaming on the Ferrino Facebook page(@FerrinoOutdoor), on the museum Facebook page (@museo.montagna) and on the Facebook page of the project On the Trail of the Glaciers(@onthetrailoftheclaciers).