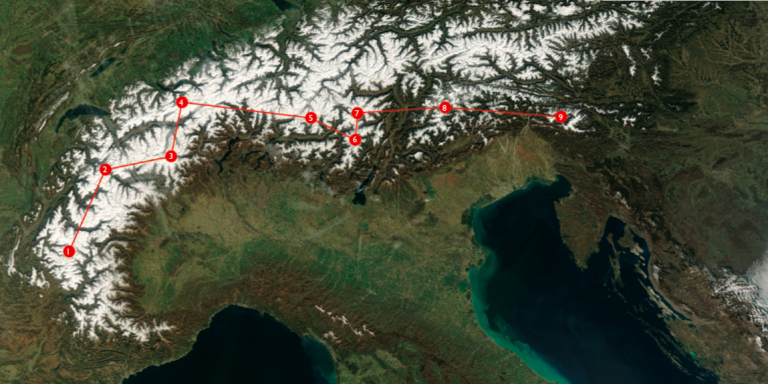 Mont Blanc, Monte Rosa, Bernina (Italian side) and Ortles-Cevedale. These are the mountain massifs, which the “Alps 2020” preliminary expedition will be focused on starting from the 25th of July.

“We expect to find particular evidence of the effects of climate change on the entire Alpine area” says Fabiano Ventura, leader of the project On the Trail of the Glaciers. “On the Alps is the collapse of the ice mass particularly relevant. According to the most recent scientific researches carried out since the second half of the 19th century until now, the Alpine glaciers have lost 60% of their surface and every year the retreat of tens of meters of fronts are observed as well as a very significant thickness reduction even at higher altitudes”.

Therefore, the glaciers of the Alpine area represent an invaluable archive that helps taking stock of the climate change situation. Because of this and the huge amount of photographic historical material available about the Alps, the organization of a preliminary “Alps 2020” expedition became necessary.

It would be impossible to reproduce the many shootings of the historical photographers that captured the Alpine area glaciers in a single expedition.

The selection of the massifs came after a long photographic research carried out by Fabiano Ventura over the last months at the photographic archives of the Sella’s Foundation in Biella and of the National Mountain Museum “Duca degli Abruzzi”, of the Modern Art Gallery and the Italian Glaciology Committee , in Turin and of the Brocherel-Broggi’s Fund in the Aosta Valley. Indeed, all five archives store historical photos related to the most important massifs of the Western Alps.

On the Mont Blanc ( Miage, the Prè de Bar and the Brenva Glaciers) and on the Monte Rosa (Lys and Belvedere Glaciers) Fabiano Ventura will reproduce Vittorio Sella’s photos (who dedicated more than 1000 photos taken between 1880 and early 20th century), Mario Gabinio (photographer and mountaineer of the late 19th century) and Jules Brocherel.

In the Valtelline Fabiano will reproduce the shootings of Alfredo Corti, scientist, mountaineer and major explorer of the Valtelline Alps and of Ursus Wehrli , whose archives are stored by the Central CAI (Italian Alpine Club of Milan and by the Valtelline CAI. Exactly in the Valtelline, the team, together with Riccardo Scotti of the Lombard Glaciological Service, will visit the Fellaria Glacier, where the geologist has placed fixed cameras in order to perform timelapses aimed at the analysis of the glacier retreat process.

AS for the previous expeditions, the Department of Earth science of the University of Milan will be involved.

Alps 2020 is sponsored once again by Enel Green Power, the Enel Group business line operating in the renewable energies sector. The company, committed on the front line in addressing climate change, chose to confirm the project support by renewing the collaboration initiated since the first expedition in 2009, acknowledging its high scientific and information value.

One thought on “On the Trail of the Glaciers: the preliminary expedition Alps 2020 departs on the 25th of July”